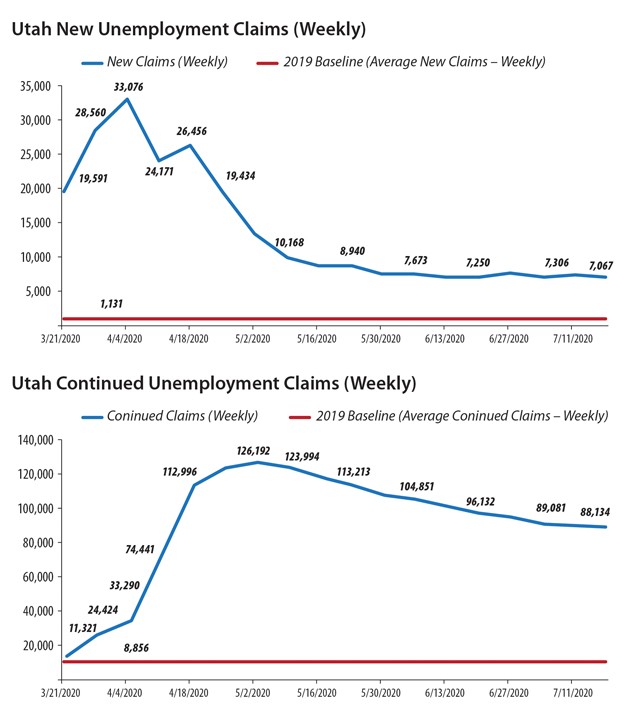 Statewide unemployment benefit claims have continued to drop since their COVID-19 peak, but they still remain higher than previous years.

Initial claims for unemployment benefits in Utah dropped to 7,067 for the week ending July 18. That’s a decrease of 239 claims, or a 3.3% decline, from the previous week’s 7,306 claims, according to the July 11-18 unemployment insurance claims report released by the Department of Workforce Services on July 23.

Continued claims filed peaked at 126,192 on May 2 and have declined every week since that peak.

The number of people not filing for continued benefits for two consecutive weeks as of July 11, 2020 was 4,959. A total of 4,922 met the same criteria during the previous week, according to the DWS report.

For the week of July 12 to July 18, a total of $78.3 million of unemployment insurance and assistance benefits were paid to Utah residents, including the federally funded $600 per week pandemic unemployment assistance claims.

“The pandemic has placed unprecedented demands on the unemployment insurance program, but the staff have and continue to do an incredible job meeting the need, issuing over $1.1 billion in benefits to eligible Utahns,” said Kevin Burt, Unemployment Insurance Division director for the Utah Department of Workforce Services. “The added support of the $600 federal stimulus expires across all programs on July 25, 2020. This program provided temporary relief for many until economic recovery began to resume, allowing ongoing stability to now be found in employment.”

Congress is considering legislation for another coronavirus economic stimulus package. The new federal economic boost may contain another direct payment for eligible taxpayers, a reduction of the $600 per week unemployment supplement to $200 for two months followed by a plan that caps unemployment benefit to no more than 70% of previous wages, funding to help schools open, a second round of funding for Payroll Protection Plan loans, and other stimulus proposals.