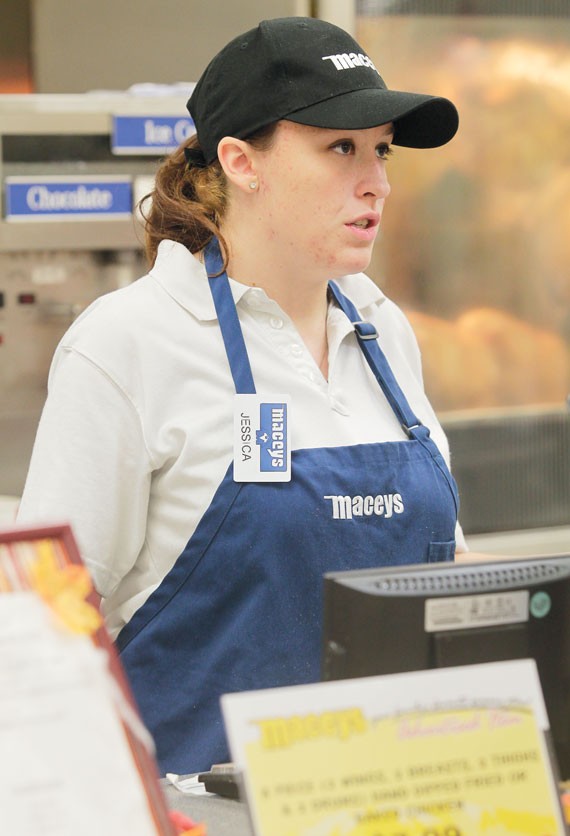 Jessica Allred weighs an order at the deli counter at Macey’s Grocery Store in Tooele Wednesday. The county’s unemployment rate in August was 6.1 percent.

The unemployment rate in Tooele County in August fell to its lowest level since November 2008.

Unemployment in the county dropped from 6.5 percent in May 2012, the highest level this year, to 6.1 percent in August, according to data released this week by the Department of Workforce Services.

“We work hard to improve employment and line up things the best we can,” said Bruce Clegg, Tooele County commissioner. “Our sales tax revenues are up, which is a sign that the economy is getting better and we he hope that positive trend continues.”

“The state’s economy has been growing at a slow pace,” said James Robson, DWS regional economist. “Tooele County is dependent on the job situation along the Wasatch Front and the county is probably experiencing some help from Salt Lake County where the unemployment rate has dipped to 5.2 percent.”

Non-agricultural employment in Tooele County in August 2012 dropped by 123 jobs compared to August 2011, a 0.8 percent decline. However, that employment figure remains ahead of the number of total jobs available in August 2010 and August 2009.

That statistic indicates that while the overall job base in the county was stable last month, most new job growth occurred outside the county.

“While Utah Fabrication has done some hiring, I don’t know of any big companies that have been hiring a lot of people,” said Sant. “That leads me to believe that any drop in unemployment is due to small businesses or people finding work outside the county.”

Joleen Thurgood, store director at Macey’s Food and Drug, said her staff has remained about the same size since June, but she has dome some hiring to replace people lost to turnover.

Thurgood had 15 part-time cashiers and courtesy clerks that left in August to go to college. All 15 were replaced. She also combined three part-time dairy jobs into one full-time job.

“I think, in this economy, being able to replace all those people is a good sign,” said Thurgood.

The number of employees at US Magnesium, one of Tooele County’s largest employers, has also remained steady throughout 2012, according to Tom Tripp, technical services director for US Magnesium.

While statistics on employment by industry sector are not available by county for August 2012, preliminary employment data for the Salt Lake City metropolitan service area, which includes Salt Lake, Summit, and Tooele counties, shows that all industry sectors except “other services” and “federal employment” grew in terms of total jobs available since August 2011.

Other services, which includes a wide range of businesses such as beauty shops, barber shops, auto repair and maintenance shops, dry cleaners and funeral homes, shed 900 jobs for a 4.6 percent decline when comparing August 2012 to August 2011.

Federal government workers also declined by 900 for a 7 percent job loss during the same time period.

“However, with the county layoffs and the eventual close-out of activity at the Deseret Chemical Depot, it is probably too early to say that everything is good,” Robson said.