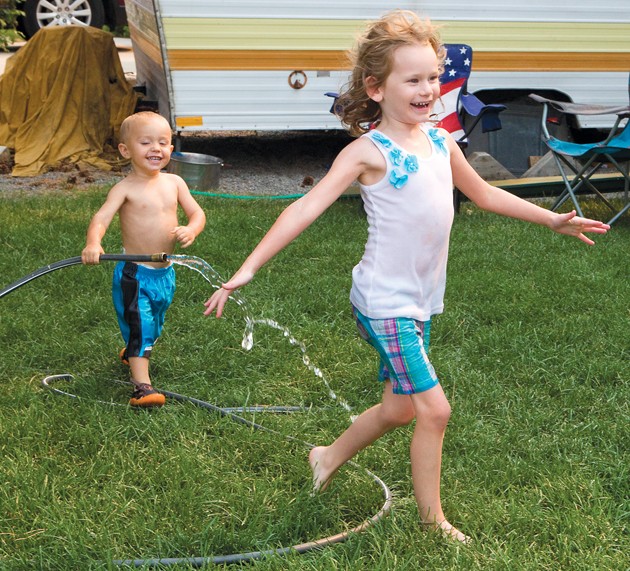 Braxtin Pierce cools down his cousin Lily Whitesides on Wednesday. Tooele City does not want to switch from using irrigation water to using culinary water so that city residents can always have that water for personal use.

August 15, 2013
Unwanted brown turning up where green once thrived

Stringent water restrictions issued by Settlement Canyon Irrigation Company are not only equating to a shorter watering window for residential customers, but they also mean less time to water huge areas of green space within Tooele City as well — a problem that is creating unwanted brown where it should be green.

Generally only a physical problem, this color changing scenario has turned emotional this year, with some residents speaking out about conditions at the Tooele City Cemetery. Despite the verbal and written complaints directed at the city, officials say many are unfounded.

“There are some brown spots, but not like anything people are portraying,” said Tooele City Mayor Patrick Dunlavy. “I go up there two to three times a week just to check on things.”

While aging sprinklers that supply thirst-quenching water to the cemetery are in the process of being updated to a fully automated system, Dunlavy says the real problem is deeper and much more uncontrollable than that.

“Not only have we had record heat, but that heat has been sustained over a long period of time and we are so tightly restricted with the use of irrigation water,” he said, citing the slim two nights per week that the city can water expansive areas, such as the cemetery. “We just don’t have enough time to water the amount of area that needs to be watered.”

Dunlavy said that the city will take some heat, literally, for not switching the sprinkling system over to culinary water when irrigation watering schedules don’t allow for proper care, but he feels the city is making the right decision.

“The reason we have turned those areas into usage by irrigation is to preserve the culinary water,” he said. “We don’t want to have issues with culinary water. It’s really important that when residents turn their tap on at home, or go to take a shower, that the water is there to use.”

Two new wells that will come online next year will increase the city’s culinary water supply considerably for next year’s dry season, but still Dunlavy said he hopes the city won’t be forced to use it to water green space.

“With the new water supply expected, we’ll take a look at switching over to culinary, but I don’t want to do that,” he said. “It’s cheaper to water with irrigation.”

By and large, Dunlavy said residents and their commitment to abide by the city’s long-time instigated watering schedule for lawn and garden, has helped. The city has been able to maintain adequate pressure and supply throughout the summer. As a result the city hasn’t had to issue hard restrictions on culinary water.

“There’s always some who abuse the system,” said Dunlavy. “But I’m very appreciative to the residents who water according to the schedule.”

Similarly, the city will also honor the request of other officials managing this precious natural resource.

“We have made the pledge to the irrigation company that we would water according to their restrictions and that’s what we’ll do,” Dunlavy said. “My parents and grandparents are buried up [in the Tooele City Cemetery] too. I think they would understand. We just have to ride out the hot temperatures.”