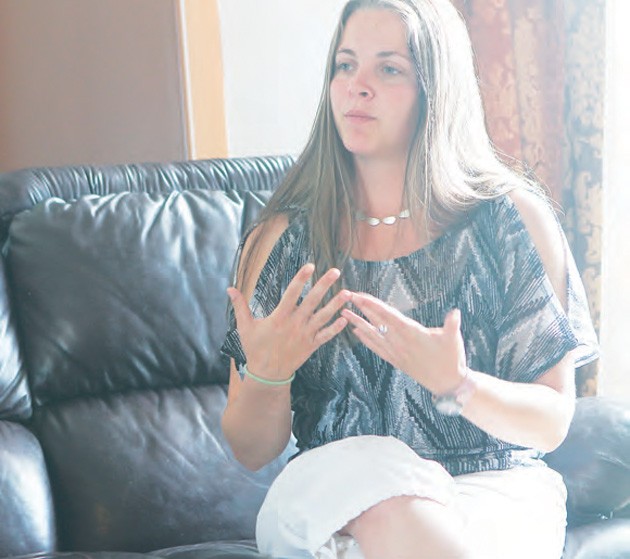 Franziska Bullock talks about her different research projects during her time at USU at her home in Tooele Monday afternoon.

just a means to an end. Franziska Bullock, however, can’t contain her enthusiasm when discussing research projects she’s completed en route to her recently awarded degree in psychology.

Bullock, 28, graduated from Utah State University’s Tooele Regional Campus with a bachelor’s degree Saturday. A mother of two young boys, she was encouraged to pursue higher education by her husband, Mark, who was just starting to take classes himself. “I always wanted to go back to school but I never had the guts to do it, so I guess the little kick helped,” she said.

Bullock’s journey to graduation was unconventional, to say the least. A native of Germany, she met her husband when he was stationed with the military in Schweininfurt, a town of approximately 55,000 in southern Germany. They were married in Germany in August 2003. When Mark was injured by an explosion from an improvised explosive device (IED) while deployed in Iraq, the couple moved to his hometown of Tooele in 2005 to be close to the Veterans Affairs Medical Center in Salt Lake. His wounds were both physical and mental, and the family has had to deal with Post Traumatic Stress Disorder from that experience. Bullock said the effects of PTSD can hurt both the person who experienced the traumatic event and his or her family members.

It was that experience with PTSD that led Bullock to research the disorder in a population far from any tangible war or battleground — families of abused children.

“I would think that it is a comparable situation, actually, with PTSD, from war to when you get raped. I really felt bad for the children. When you have PTSD, it’s not only you getting PTSD — your family members can get it also,” she said. “There’s a caregiver burden from spouses or family members that are taking care of the other person, so that aspect really interested me a lot.”

As a requirement for one of her classes, Bullock had to have an internship at an office or clinic doing work that was related to psychology. She did not know much about the Children’s Justice Center, but chose that venue for reasons of interest and altruism.

“I thought it would be more interesting to work with children and wanted to give back to the community,” Bullock said. The CJC is a home-like center where victims of child abuse, sexual or physical, are interviewed just once, instead of having the children interviewed by a litany of law enforcement officers and welfare professionals.

A few weeks into the internship, which she began last September, Bullock noticed indications of PTSD in the family members of some of the children interviewed at the center — signs she might not have recognized if not for her experience with the disorder.

Bullock was given two undergraduate research awards, Terry Peak Undergraduate Researcher of the Year and Utah State University Tooele Regional Campus Researcher of the Year, and nominated for the Robins Award, which is the highest honor given to students at USU for excellence in several different areas, for a different research project — an ongoing study into online and distance education. That research is ongoing, and she said she aims to find how the remote learning medium is most often used and how it can be more effectively used for students and professors alike. A survey of USU’s distance students will be conducted shortly, she said, after which she’ll examine the data.

Bullock has applied to nine graduate schools and wants to eventually get a Ph.D. in psychology. She also wants to continue her research into PTSD.

“There’s not a lot of research done yet into PTSD, especially with traumatic brain injury or in cases of rape, for example. There’s so much that you could give back to the community with that research, and that would make a great change,” she said. But, if time brings different challenges and opportunities, she said, so be it.