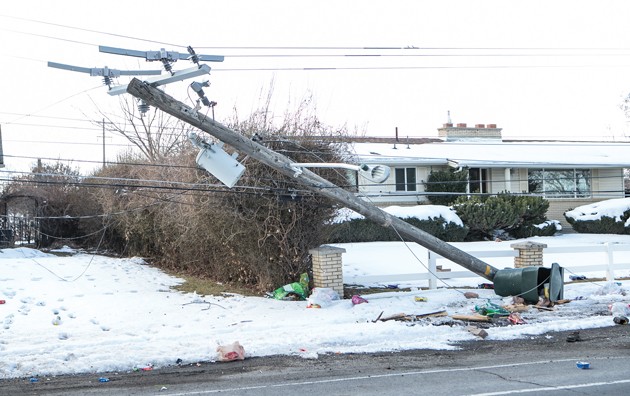 Power pole knocked over by a Utah Transit authority van on Main Street Tooele City on Tuesday morning. Power outages were reported in some areas of the city

On Tuesday morning a Utah Transit Authority bus crashed into a power pole after the driver suffered a medical emergency.

Tooele City Police received a call around 10:00 a.m. Tuesday that a UTA bus had crashed.

A 73-year-old man who was driving the UTA bus was traveling westbound by Blue Peak High School when he suffered from an unexpected medical emergency, according to Sergeant Don Nelson with the Tooele City Police Department.

The driver crossed over into the eastbound lane, hit a power pole and then hit a brick wall, according to Nelson.

The crash knocked the power out at the high school after the crash occurred.

The Tooele County School District reported that multiple schools experienced a power surge, as well as loss of power for a short period of time.  Rocky Mountain Power sent a message to certain schools to unplug electronic devices.

The accident and power outage did not impact the heat, light, or meals served during the school day, according to the school district.

After the accident the driver told police that he had one passenger on the bus at the time of the accident, but police didn’t find any passengers on the bus.

“It was an odd weird thing I guess,” said Nelson speaking about the accident.

There were no other vehicles involved in the accidents and no injuries were reported.