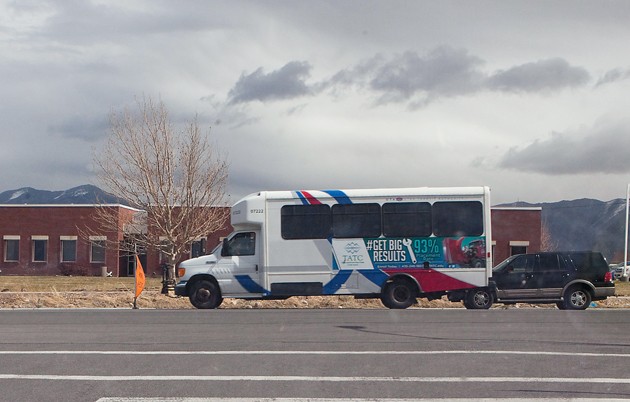 A UTA bus that travels between Grantsville and Tooele may be cancelled because of low ridership.

An underutilized bus route connecting Grantsville and Tooele could be altered or discontinued, according to the Utah Transit Authority.

Ryan Taylor, the coordinated mobility manager for UTA, said public transportation in the county will continue but the current F401 route, which runs hourly between Grantsville and Tooele, is not sustainable.

“Ridership is not where we want it to be,” he said.

About 300 riders use the bus route every month, which runs Monday through Friday, Taylor said. The F401 also includes twice daily flex routes along SR-138 and SR-36, including various stops in Stansbury Park.

UTA is working with the county senior centers, Tooele Applied Technology College and government officials to come up with an alternative, Taylor said.

Since the Grantsville and Tooele route switched to an hourly schedule, the number of riders has not met with expectations, Taylor said. Grantsville City Mayor Brent Marshall acknowledge ridership is uneven during the day.

“There are some times of the day when the bus has a lot of people on it,” he said. “Other times, there’s absolutely no riders.”

The number of riders on the F401 route is low, even for a rural bus route, Taylor said. Another bus route in the county, F400, which begins and ends at the Tooele Senior Center and includes stops at TATC, Walmart and Mountain West Medical Center, has more than three times the riders, with about 1,000 per month, he said.

UTA has tried different methods to advertise the bus route in an attempt to boost the number of riders using the service, Taylor said. In about three years of operation, the F401 route has failed to gain traction in Tooele County, he said.

Marshall said he will include information about the bus route in his Mayor’s letter in April.

Since reviewing the possibility of altering or discontinuing the route, UTA has collected surveys from Tooele County residents. Taylor said about 72 to 75 percent of respondents said they would never use public transportation.

The target groups for the bus route are those that don’t have any access to better transportation, Taylor said. That includes seniors, veterans, low income individuals and those with disabilities.

Due to the low ridership number, the F401 route is heavily subsidized by taxpayer dollars, Taylor said. Finding a more cost effective way to provide public transportation has been the goal of meetings between UTA and local entities, he said.

“We want to have the right service,” Taylor said.

With low usage, it’s possible the hourly route between Grantsville and Tooele is discontinued, Marshall said.

“It’s one of these things that chances are we’re going to lose it,” he said.

The UTA will hold a public meeting about the future of the F401 route at the Tooele Senior Center on March 26 at 1 p.m.