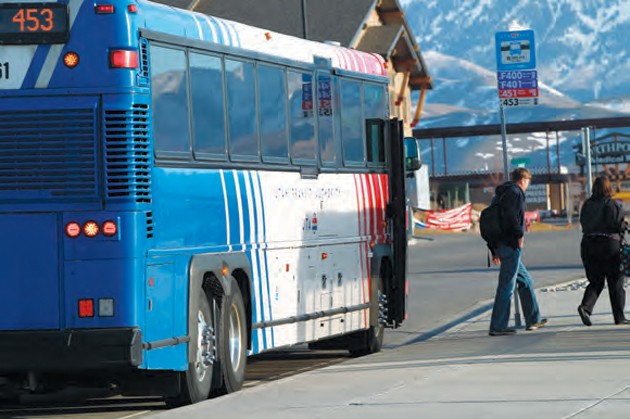 People exit a Utah Transit Authority bus Monday evening at the Park and Ride station on 2400 North. Among the 524 bills and resolutions passed at the Utah State Legislature, Tooele County will receive a non-voting member on UTA’s board of trustees.

When the Utah Legislature adjourned at midnight Thursday it set a new record of passing 524 bills and resolutions. That is seven more bills than the previous record of 518 passed in 2009.

Seven of those new bills were sponsored by representatives from Tooele County. Bills about water rights, funding for local road projects, and radiation control amendments were also passed with other legislation.

In his first term back in the legislature since 1992, Rep. Merrill Nelson sponsored four bills that passed the 2013 legislative session. His bills include:

House Bill 86 – Property Tax Rate Certification Date, allows taxing entities such as cities, school boards, and service districts, 14 extra days to adopt their budget if they do not receive their certified tax rate a week before their budgets are due.

The UTA Board currently consists of 15 voting members. Five board members are appointed that represent Salt Lake County, Grantsville and Tooele City. However because the appointments are based on population, all five people representing Tooele County live in Salt Lake County.

House Bill 231 – Hazardous and Mixed Waste Fees, allows businesses that dispose of hazardous and mixed waste to collect fees imposed by the state from the generators of the waste.

Rep. Doug Sagers, in his second term representing Tooele City and Stansbury Park, passed three bills during the 2013 session. They include:

House Bill 95 – Amortization Rate Contribution for Re-employed Retirees Revisions, clarifies under what conditions employers must make contributions to the state retirement system for employees that have been re-employed after retirement.

House Bill 128 – Driver License Suspension Modifications, specifies conditions under which a judge may consider reducing a driver’s license suspension as a result of a DUI conviction for a person under 19 years-old from two years to six months.

House Joint Resolution 14, sponsored by Rep. Ken Ivory, R-West Jordan, passed both the Senate and the House. Joint resolutions are non-binding statements of position by the state legislature and do not require the signature of the governor.

HJR 14 calls on state, county and local governments to protect and defend jurisdiction over the state’s water resources.

The federal government, primarily the U.S. Forest Service, has undermined the state’s jurisdiction over water resources, according to HJR 14.

Substitute Senate Bill 109 – Change Application Procedure, sponsored by Sen. Ralph Okerlund, R-Monroe, ran out of time and did not pass this session.

The bill clarified who may file a request for a change of water rights, and it created a separate process for requests for water right changes filed by municipalities.

SSB 109 passed the Senate on Feb. 26 but didn’t pass the House until March 14, the last day of the session. The House amended the bill and the Senate voted not to accept the amendments. The bill was sent to a conference committee but did not make it out of committee before the legislature adjourned.

The legislature appropriated $2.5 million to be used by Tooele City to improve roads from SR-112 to the Tooele Applied Technology College. The funding will be used to widen and upgrade roads serving the educational corridor on Tooele City’s west side that houses Utah State University’s Tooele Regional Campus, the TATC, and the Tooele County School District’s Community Learning Center.

The bill also sets aside fees collected for radioactive waste licenses for the administration of radiation control programs.

At presstime, Gov. Gary Herbert had signed 15 of the 524 bills passed by the legislature. The Utah State Constitution gives Herbert until April 3 to either sign the remaining bills, veto them, or let them become law without his signature.

If the governor vetoes legislation after the end of a session, the state constitution provides for the president of the Senate and the speaker of the House to poll their members.

If two thirds of the members of each House agree that a veto override session should be held, a special session to consider overriding vetoes must be convened within 60 days after the end of the general legislative session.