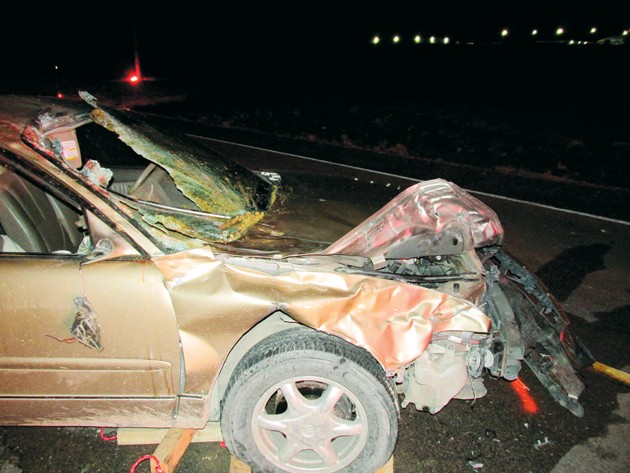 A Vernon couple was injured after their vehicle struck and killed two horses on SR-36 near Rush Valley Friday night.

Robert Durrant, 88, and his wife, Marydean, 83, were driving south on SR-36 near the intersection of SR-110 in Rush Valley at about 10:15 p.m. when they hit two horses that had gotten out of a corral, according to the Utah Highway Patrol.

The car struck the horses on the right front passenger side, which was occupied by the woman. According to the UHP, she suffered severe cuts on her face while the man’s injuries were less severe.

They were taken to Mountain West Medical Center for treatment.

The horses, both bays, were severely injured by the impact and had to be euthanized at the scene, according to the UHP. The Durrants were traveling at an estimated 55 mph when they hit the animals. The highway was closed in both directions for about an hour while emergency crews responded to the accident.

The area where the crash occurred is open range and livestock have the right of way to cross the road to get from one grazing area to another.

In open range areas, motorists are responsible to avoid livestock that may wander onto roads. They are also responsible for the cost of any animals that they hit and kill.

Tooele County Attorney Doug Hogan said the open range law was devised decades ago to protect livestock owners. It was also devised to warn motorists that livestock may be on the road adjacent to vast tracts of land too cost prohibitive to fence.

In these instances, the owner of the livestock cannot be held criminally responsible for any injuries or property damage to the driver. Yet, some cases may be debated civilly.