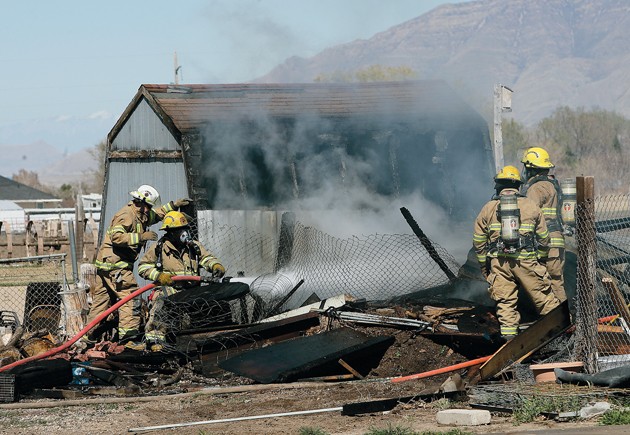 A fire destroyed a shed behind a Tooele home on Thursday afternoon at 774 W. Vine St. The shed collapsed from damage sustained, but the adjacent house received little to no damage.

A fire destroyed the shed behind a Tooele home last week, but the adjacent house received little to no damage.

The Tooele City Fire Department responded to a fire at 774 W. Vine St. before 2:30 p.m. on Thursday. When firefighters arrived the out building was already engulfed, said Assistant Fire Chief Bucky Whitehouse.

The shed, which collapsed as a result of the fire, was situated between another outbuilding and the house. The other shed also received heavy fire damage, with the entire south side wall and roof consumed by the flames.

Whitehouse said the blaze was contained quickly, which helped prevent any damage to the home.

“It was out relatively quickly,” he said.

After firefighters knocked down the flames, thick white and gray smoke billowed into the streets and sky surrounding the home.

A portion of Vine Street was closed to through traffic while firefighters put out the flames and cleared debris from the shed.

The cause of the fire is still under investigation.