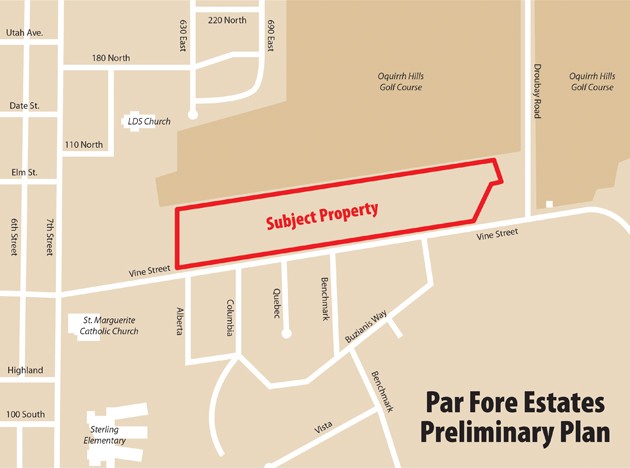 A preliminary plat for a subdivision on Vine Street received a positive recommendation from the Tooele City Planning Commission during its meeting last Wednesday.

The project, in the R1-7 planned unit development zone, would create 62 single-family  residential lots on 13.5 acres immediately south of Oquirrh Hills Golf Course. Due to the PUD designation, the development, dubbed Par Fore Estates, has lots of 4,200 square feet to 6,200 square feet but maintains the R1-7 density due to open space.

The development includes an open space along a golf cart path north of the residential lots and two stormwater detention basins. A homeowner’s association would be required to maintain the open space.

Par Fore Drive, which runs through the development and connects to Vine Street at Alberta Drive and 850 East, would be a public road.

A positive recommendation for the preliminary plat was approved unanimously, on a motion from Commissioner Chris Sloan and seconded by Commissioner Tyson Hamilton.

The rezone would change the acreage from 1 acre lots to 7,000-square-foot lots and is surrounded on all four sides by rural residential zoning. The property is located north of Utah Avenue and west of Coleman Street.

A public hearing on the proposed rezone lasted more than 50 minutes, with local residents expressing concern about traffic, safety, infrastructure and having a higher density of housing so close to larger lots, some with livestock. There were also several speakers who supported the developer, Brad Lancaster, and the need for affordable, single-family housing in Tooele City.

Resident Steve Wilcock said he felt it was the same issue dressed up differently, as a zoning map amendment to MDR, or medium-density residential, was proposed in March and received a negative recommendation.

“You’re putting this zone right in the middle of an RR-1, which to me again is spot zoning,” Wilcock said. “And I don’t know why the city or you would want to do that.”

Lancaster said he was sympathetic to preserving the rural housing designation in the city, but the need for housing outstrips current demand.

“This is a market-driven demand and markets should be allowed to be free,” he said. “And this is a market that is screaming at us all, ‘Build houses.’”

Commissioner Shauna Bevan, who motioned for the negative recommendation on the rezone of the property in March, said she knows of problems in subdivisions where a lot of homes are built adjacent to established corrals and barns for existing livestock.

“It just doesn’t create a good neighbor environment,” Bevan said. “You’ve got the flies, the noise, and people think it’s going to look lovely and they’re going to like it and then they come and they complain to the neighbors with the animals.”

Bevan motioned to send a negative recommendation to the Tooele City Council on the zoning map amendment, seconded by Commissioner Melanie Hammer. The vote passed by a 6-1 vote, with Commissioner Phil Montano the lone dissenting vote.