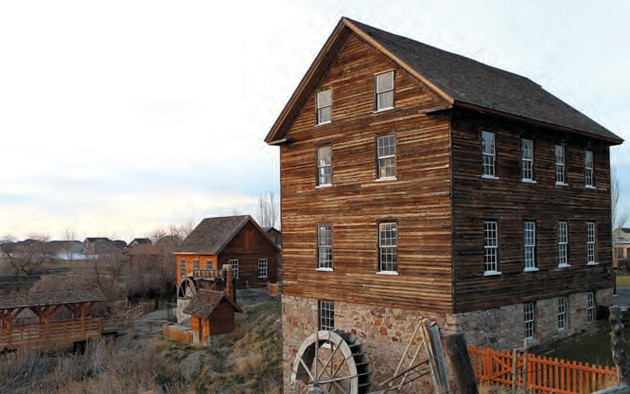 Volunteers that helped restore the Benson Gristmill 30 years ago are worried that Tooele County’s budget crisis may jeopardize their efforts to bring life to the area’s past.

“We were all laid off,” said Suzy Wall, Benson Gristmill supervisor. “We don’t know what the plan will be for the place. I’m told they are working on it. In the meantime, many of the volunteers that have put over 25 years into restoring this place, are very concerned about what will happen to their work.”

Before the county started layoffs last fall, the Benson Gristmill had a staff of 12. Most were part-time seasonal employees that worked from May 1 to Oct. 31 giving tours, taking care of the grounds, and performing restoration work, according to Wall.

The grounds include several restored pioneer buildings, and a pavilion that the public reserves for weddings, reunions and parties.

An operational replica of a gristmill opened in 2010, and a replica of a one-room schoolhouse was completed and scheduled to open to the public this year, added Wall. Most of that restoration work was completed with volunteer work, donations and grants.

The gristmill has hosted a farmer’s market and craft fair, an annual pumpkin walk, and the annual outdoor production of the Benson Gristmill Performing Arts Foundation.

The mill was first built in 1854, but after it closed in the 1940s, the structure fell into disrepair.

In 1983, a volunteer committee consisting of Jack Smith, Wayne Shields, Boyd and Ouida Blanthorn, Ray Court, Bob and Marilyn Shields, Douglas Smith and Maxine Grimm set out to save it.

They obtained the property from Terracor, the original developer of Stansbury Park, and removed debris, restored the exterior of the gristmill building, and strengthened its foundation.

The gristmill is now considered one of the most intact pioneer-era industrial structures in Utah.

In 1995, overwhelmed by the number of people using the building and concerned about liability, the volunteer committee approached the county commission about taking over the facility, according to Marilyn Shields.

Originally the gristmill was part of the county’s engineering department and later it was assigned to the parks and recreation department. Shields was hired as the gristmill’s first supervisor. She retired in 2010.

“The whole community, from Boy Scouts to families, use the gristmill,” she said. “People from far away, including foreign countries, stop in to see the gristmill. It’s the first thing people see when they come into the county.”

Commissioners aren’t sure what the future of the facility will be.

“That’s what the next 30 days is all about,” said Commissioner Shawn Milne. “We don’t intend to close the place down and never reopen it. We have to look at fees and staffing, and see how we can make things work out.”

Volunteer staffing has been mentioned as a possibility.

“One thing we learned is that volunteers are great, but they aren’t always reliable,” said Shields. “You need somebody who you can count on to be there on a regular time schedule. Operating the new gristmill takes special knowledge, the people that were there had been trained.”

The Benson Gristmill is more than just an ordinary park to Shields.

“Restoring places like the gristmill honor the pioneers that built them,” she said. “The gristmill is a place of education. It tells people the story of Tooele County.”

Shields is worried about the years of love and care that volunteers and staff have put into the mill.

“You can’t just turn the place over to anybody,” she stressed. “The staff must have knowledge of the history and a love for the place in order for it to work.”