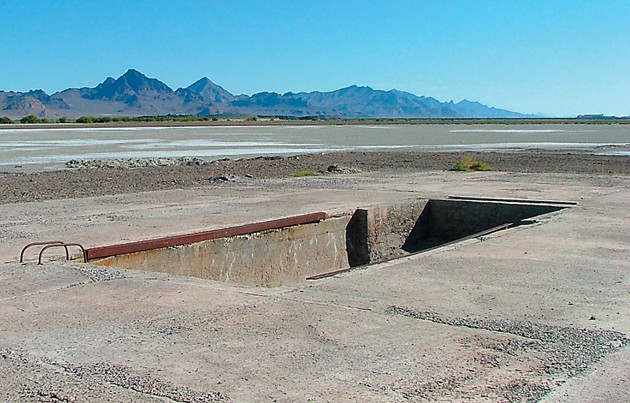 A bomb pit at the Wendover Army Airfield.

June 30, 2016
Walk in the footsteps of the ‘Greatest Generation’ at Wendover Airfield

In last week’s article, we explored the incredible contribution Wendover and the Greatest Generation made to bring Nazi Germany to its knees via strategic bombing.

While the sacrifice and heroism are amazing, even more significant contributions to the eventual surrender of the Empire of Japan were made at Wendover. This is the tale of the 509th Bomb Group that trained, outfitted and deployed from Wendover in 1945.

By the fall of 1944, Wendover Army Airfield was a hotbed of activity. This oasis in the desert consisted of more than 20,000 military personnel and civilians, 668 buildings, seven large aircraft hangars and three 8,100-foot-long concrete runways.

While Wendover AAF thrived, the situation in the Pacific was grim. In February 1945, the battle of Iwo Jima raged on a tiny, pork chop-shaped island no more than a few miles long. More than 18,000 Japanese and 6,800 U.S. Marines and Navy sailors were killed fighting over this tiny piece of land.

The situation grew even more grave at the battle of Okinawa, where from April 1 to June 22, 1945, a battle raged over an island consisting of 464 square miles. For comparison, New York City is 468 square miles. The bloody struggle for this minute piece of land led to the deaths of 12,510 U.S. servicemen and 110,000 Japanese. Thousands of Japanese civilians killed their families or committed suicide by jumping off cliffs into the sea rather than suffer the dishonor of surrender.

Japan prepared more than 8,000 suicide aircraft and prepared the civilian population for a fanatical, last-stand defense of the homeland. Projected casualties vary but estimates created by the war department, based off of experiences at Iwo Jima and Okinawa, put U.S. losses at 400,000-800,000 killed in action and 5-10 million Japanese killed, had the U.S. gone through with a full-scale invasion of Japan. But the U.S. had another idea in the works to prevent this catastrophic loss of life.

The 509th Bomb Group was activated on Dec. 17, 1944, and a young, energetic Army Air Corps officer named Col. Paul W. Tibbets was selected to be its commander. Tibbets had his choice of installations throughout the Air Corps inventory for his top secret mission, but once he visited Wendover, he knew the search was over.

According to an interview of Col. Tibbets posted on the Wendover Airbase website, the commander of the P-47 Thunderbolt unit there described Wendover as “The most perfect base I’ve ever been on. You’ve got full machine shops, everyone’s qualified, they know what to do. It’s a great place!”

Tibbet’s mission was part of the larger “Manhattan Project” and Wendover, code-named “Kingman,” was known as Manhattan Project site K. Overnight, the base was completely cleared of units currently stationed there, which dropped the population from 20,000 to around 1,500.

An operation code-named “Silver Plate” was undertaken to modify B-29 Superfortresses to accommodate the “Little Boy” and “Fat Man” atomic bombs. The airfield was also modified in several ways. Bomb assembly buildings were constructed on the south area of the base, bomb pits were installed to lift the heavy bombs into the belly of the B-29s, and the largest hangar on the base had a square cut in the top of the hangar doors so the large B-29 tails would fit into the hangar.

The bomb pits were unique. The “Little Boy” atomic bomb weighed 9,700 pounds and the “Fat Man” bomb weighed 10,300 pounds. It was no easy task to get these heavy items into the bomb bays of the Superfortresses, so the bombs were dragged on a dolly over the bomb pits and aligned with a hydraulic plate. The hydraulic plate would lower the bomb down into the pit and then a B-29 would be carefully towed over the pit. The hydraulic base would then lift the bomb into the belly of the airplane, where it would be secured.

Col. Tibbets was advised at Los Alamos that he would have to do a hard bank of 159 degrees after dropping the bomb to avoid the expanding shockwave. According to his interview on the Wendover Airbase website, Tibbets practiced this maneuver at Wendover over and over at 25,000 feet, stating that at first he was afraid it would tear the plane apart. He eventually got it to where he could bank the plane away with ease within 40 seconds, which was required to save his plane and crew. Dozens of “Pumpkins,” which were “Fat Man” bomb replicas, were loaded into B-29s, flown from Wendover and dropped in practice runs on the West Desert of Utah in preparation for coming events.

Tibbets selected his airframe for the first atomic mission and named it the “Enola Gay” after his mother Enola Gay Haggard. On July 16, 1944, the USS Indianapolis was loaded with the atomic components and sailed for Tinian Island, where it arrived on July 26, 1944. The Indianapolis then headed to Leyte in the Philippines, but was sunk by a Japanese submarine and 881 of the 1,197 souls on board perished by fire, oil, drowning, dehydration or shark attack while floating in the tropical sea.

President Truman warned the Empire of Japan that a weapon of unimaginable force would be deployed against them if they did not surrender, but the Japanese refused. On Aug. 6, 1945, Col. Paul Tibbets and the crew of the Enola Gay dropped the “Little Boy” atomic bomb on Hiroshima. In a fraction of a second, the once-pristine city was incinerated.

This event was followed by another warning to the Empire of Japan, but again it was met with silence. On Aug. 9, 1945, Maj. Charles Sweeney, flying the B-29 “Bock’s Car,” delivered the “Fat Man” bomb that had a destructive force of 20,000 tons of TNT on Nagasaki. The city was obliterated.

For reference, the two bombs contained more destructive power than all of the bombs dropped on Europe by the U.S. Army Air Corps combined during World War II.

After Nagasaki, the Japanese Empire again remained silent. According to Tibbets, Gen. Curtis Lemay said to him, “You got another one of those d— things?”

“Where is it?” asked Lemay.

“Over in Utah,” replied Tibbets.

“Well get it over here. You and your crew are gonna fly it,” concluded Lemay.

In 1948, as these actions were weighing on people’s souls, Col. Tibbets was called into President Truman’s office and the president asked him, “What did you do?”

Tibbets replied, “Mr. President, I think I did what I was told.”

Truman responded “You’re d— right you did and I’m the guy who sent you. If anyone gives you a hard time about it, refer them to me.”

War truly is hell on earth. There is nothing good or civilized about it. However, when you are in a struggle with a fanatical foe bent on the destruction of your civilization, you engage in total war and victory is the only acceptable outcome. Our “Greatest Generation” did not ask to be attacked on Dec. 7, 1941, at Pearl Harbor, but they did what they had to do to defend the world and preserve freedom and liberty.

The dropping of the atomic bombs on Hiroshima and Nagasaki are a horrendous chapter in the history of the earth, but these missions resulted in the swift conclusion of that heinous war and saved hundreds of thousands of American lives and millions of Japanese lives.

Why am I discussing all of this in the Outdoor Adventure column? Because you can visit Wendover Airfield today and walk in the footsteps of the Greatest Generation that literally saved the world. Wendover should be revered as a national treasure, just like Yorktown, Fort McHenry or Gettysburg.

The sky is always big, blue and sunny at Wendover and if you visit the place, you can obtain permission to walk the flight line past the silent B-17 hangars, past the Norden Bombsight storage building to the Enola Gay Hangar and see the square cut in the hangar doors that allowed passage of the B-29.

The bomb pits are still out near the runways and the weathered buildings where the pumpkins were built still stare blankly at the desert. You could spend a whole day exploring this old base, listening to the ghosts on the wind and thinking about the incredible global impact our Wendover in Tooele County had on the final resolution of World War II.