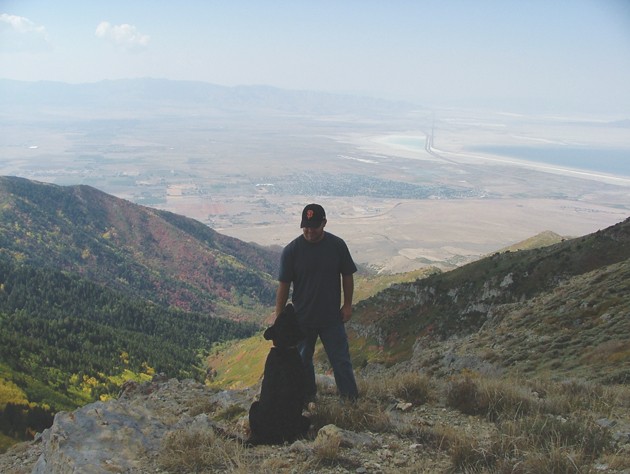 The author on the summit of Nelson Peak with his dog Duke and the community of Stansbury Park and Tooele Valley below.

May 2, 2013
Want a tough hike? Nelson Peak is king of the Oquirrh Mountains

At 9,359 feet high in elevation, Nelson Peak dominates the Northern Oquirrh Mountains and looms large above the communities of Stansbury Park, Erda and Tooele.

The peak is unique. Not only is it the tallest in its vicinity, but it reaches high enough to demand necessary moisture to support a beautiful Rocky Mountain-type forest on its western aspect in Bates Canyon, and on its upper eastern benches at the head of Harker’s Canyon.

Other peaks in the area — Coon (Farnsworth Peak), Barney’s and Markham Peaks — do not possess the mature forested terrain that occurs in Bates Canyon on Nelson Peak and are quite barren by comparison, even though Coon Peak, with its bristling TV and radio towers, is only a few hundred feet lower in elevation. Nelson Peak is part public land and part private with the property line located at the summit ridge. Most everything from the summit to the west is public BLM land. Everything to the east is private land mainly owned and controlled by Rio Tinto.

I have long been fascinated by Nelson Peak as I can see it from my backyard in Stansbury Park. I find the band of cliffs that comprise a sort of boomerang around the summit particularly interesting. Last October the fall colors were incredibly beautiful on Nelson Peak from my vantage point in Stansbury, so I decided that I would finally climb it to the top and do some exploring along the way. A climb up Nelson Peak from any aspect is no small feat. There are no maintained trails, or for that matter, trails of any kind to the top on public lands. There is a road that goes to the summit from the eastern side, but it may as well not exist as it is on private land and inaccessible.

Strong hikers, if you are looking for some good back country adventure, I will describe a route up and down Nelson Peak that I really enjoyed but was extremely exhausting. My friend, Paul, and I, along with my trusty old dog “Duke,” who is a big black lab, started our hike of Nelson from the parking point described in the “Bates Canyon” article written previously. It was a cool fall morning in the shadows but the bright rays of morning sun created a weird atmosphere of colored light beneath the red, yellow and orange canopy of oak and other deciduous trees that were at their peak autumn brilliance. In areas these trees formed a sort of tunnel with their branches, some of which were covered with orange lichens. The scene looked like a strange landscape you would expect to see near the “Shire” in Lord of the Rings.

We hiked up Bates Canyon rather quickly, past the old hunters camp and into the aspen where the trail ends. There are no adequate words to describe the golden splendor of the white trunked aspen forest in the fall. The beauty of it was striking as it was a totally clear day, bright sun shining with powder blue sky and no wind.

At the end of the trail there is a decision point for taking the summit of Nelson Peak. You can either cross the drainage and climb up the rocky face of a ridge that connects to the summit at the head of Bates Canyon — which by the way would be easier and makes the most sense. Or, you can stay within the aspen and head southeast up to the top of the ridge on the south side of Bates Canyon and then on to the summit of Nelson Peak.

Paul decided to head for the rocks and take out the peak via that route. I, on the other hand, was so thoroughly enjoying my walk through the aspen that I decided to stay within the trees and head straight up the mountain. My so called trusty companion, Duke, bailed on me for the easier route and followed Paul up to the summit. Even though my path was quite a bit more difficult, the experience of walking through those aspen is one I will never forget. I took pause often to gaze upon my back trail down upon the carpet-like forest of Douglas Fir and White Fir fringed by aspen that chokes Bates Canyon.

Every inch of elevation up the steep head of this canyon was hard bought but worth the price. I finally emerged on the ridge top and had a great view down into Pass Canyon. The aspen on this ridge were ablaze with color and the map-like appearance of Tooele in the distance, far below to the southwest, was an interesting sight to say the least. I turned my attention back to the peak and noticed Duke and Paul on top of the escarpment or band of cliffs that comprise the summit. This swath of grey limestone cliffs is plainly visible from Tooele Valley and I estimate these cliffs to be 60 to 70 feet tall.

I found a notch in the middle of the cliff band and made my way to the summit. An amazing 360-degree view unfolded around me. I could see the communities of Salt Lake Valley and the Wasatch Mountains to the east; the Barney’s Canyon Mine and Kennecott Pit to the southeast; Pass Canyon and Tooele to the southwest; the ponds and communities of Stansbury Park; and the dual snake of I-80 to the west creeping out to the desert, and the bulk of peak 9,175 feet to the north. It must have been lady bug mating season because there were thousands of them literally covering some small matted sage brush plants.

We looked down upon the wondrous scene that was Bates Canyon replete with all its various fall colors and evergreen forest vegetation, and then began to consider the end game—how do we get down? We made a tactical error in this department as we headed north climbing peak 9,175 and then descended the southern ridgeline of Pole Canyon along its spine all the way back down to the car park at the mouth of Bates Canyon. That section was a total butt kick and I do not recommend it even though the views from the summit of peak 9,175 feet were spectacular.

If you do climb Nelson Peak remember four things: 1. This hike is not for beginners. Only expert hikers who are comfortable off trail for extensive periods of time where there is much elevation gain should attempt this. 2. Everything east of the summit is private property. Do not violate the rights of private property owners. Stay on public lands west of the summit ridge. 3. For heaven’s sake return the same way you came up. Paul, Duke and I saw some different country on the way down sure enough, but it cost us. 4. This is a completely dry hike, so take plenty of water. Nelson Peak hike is gorgeous and the views cannot be beat, so if you want to gauge your toughness — take a crack at it.

For more information on access to Bates Canyon, contact the Salt Lake District Office of the Bureau of Land Management at 801-977-4300.