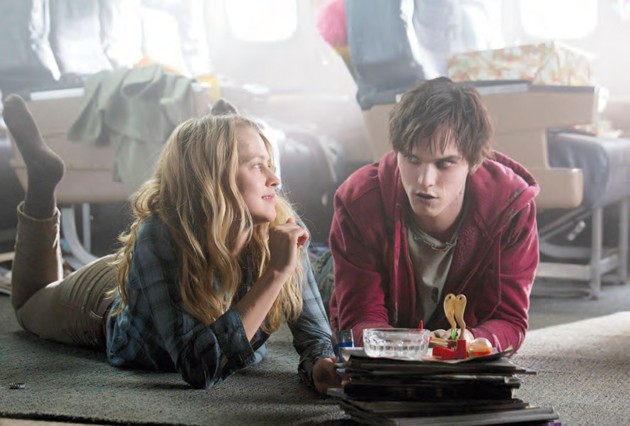 Romeo and Juliet thought their romance was complicated, but at least they both had a pulse.

Well, at least at the beginning. By the end not so much. In “Warm Bodies,” the couple’s state of living or dead is not as clear-cut.

We first meet the undead R (Nicholas Hault), who can’t remember the rest of his name but is pretty sure it started with an “R,” shuffling through an abandoned airport. Through his lucid, matter-of-fact narration, we learn that he, and others like him, have made their home in this airport. Also we learn that he is a zombie — though, we find, as he extols the virtues of vinal verses mp3 and shows his extensive collection of knickknacks, hardly a typical one.

Zombies don’t talk much, and they’re pretty solitary creatures, but R has a friend, M (Rob Corddry), with whom he occasionally grunts in a way that could almost be mistaken for conversation. One day, R and M decide to venture out of the airport and try to find some living humans for lunch. The band they find is a party of young survivors who are on a medicineretrieval mission for a heavily guarded fortress where remaining humans live.

It is there that R sees Julie (Teresa Palmer). He is entranced, and then eats her boyfriend (Dave Franco). After seeing some of the boyfriend’s brain and thereby experiencing some of his memories, R decides to bring Julie back home with him. He tries to make her comfortable in his souvenir-filled airplane where he lives, but his promises to not eat her aren’t terribly comforting, for some reason.

Julie makes the best of the situation, though, and after he saves her from an ill-planned escape attempt, she decides that maybe he’s not so bad after all. Still, she wants to go home, so he agrees to protect her as they travel back to the walls of the fortress. His infatuation with her, though, re-awakens the life snuffed out by the zombie infection.

As he gradually relearns what it means to be human, that hope infects the rest of the zombies. This puts them on the run from the most vicious kind of zombie, called boneys, which have turned against the healing group of undead, as well as the zombie-killing humans, lead by Julie’s father (John Malkovich). The concept of a zombiehuman retelling of the Romeo and Juliet trope is a like-it or hate-it one, and I’ll admit, I was definitely not for it. Romeo and Juliet adaptations are seldom done well, and the zombie thing has been done to death. Plus, a human (who happens to look a bit like Kristen Stewart) falling for a pale dead guy? Been there, done that, right?

Not so fast. “Warm Bodies,” based on the novel by Isaac Marion, is nothing like “Twilight,” and my fears about the adaptation and post-apocolyptic invasion of the undead were wholly unfounded. Instead, it manages to consistently be fresh, funny, warm and clever. R’s narration gives us motivation and reaction where his motion-restricted state of being lacks in conventional drive and communication. It is also funny in the most relatable, low-key way. Despite looking a little like K-Stew, Palmer’s reaction to being with a dead date is much more believable, and her character’s necessarily tough-as-nails exterior isn’t so heavy-handed as to keep her inner hope and cheer from shining through. Julie’s interaction with Nora (Analeigh Tipton) also feels far more light and natural than most on-screen friendships. It also doesn’t dwell on the destruction and decay of the zombified world, but simply takes it in passing with a shrug.

“Warm Bodies” is billed as a comedy-horror-romance, and it straddles all three genres just right. The budding romance between Julie and R is definitely present, but is never overpowering or cloying. The necessary “fall” in the third act feels natural, too, unlike in almost any chick flick. Because zombies make up half of the population, there is a horror element, as well, but that also is restrained and doesn’t rely on unnecessary jumps for cheap scares. And seriously, this movie is funny. R’s narration is consistently wry and witty without trying. Zombie nature is used for gags, but not to the extent of limbs randomly dropping or needless gore — think a much lighter, less violent and much more clever kind of “Zombieland.” Every joke is perfectly punctuated with a look, comment or gesture that wraps it up nicely without seeming like it’s being softballed to the audience. The only weak spot was the CGI of the boneys, which was clearly not done by Peter Jackson’s crew. But I like to think that was made up by the soundtrack, which is the best I’ve heard since “(500) Days of Summer.”

“Warm Bodies” is funny, warm and light, and it never feels long or overly drawn-out, though you should remember not to take it too seriously. Hey, guys, Valentine’s Day is coming up — between the romance, horror and comedy, this could be one of those rare, perfect date movies. Girlfriends/wives, go for the romance; boyfriends/husbands, go for the zombies; both of you stay for the humor and the heart.

Politics and corruption are at the heart of this noir-esque flick, but the real message is that everybody’s got something to hide.

When the movie begins, seven years in the past, we see a New York City detective, Billy Taggart (Mark Wahlberg), get cleared of murder charges in the shooting of a 16-year-old kid himself accused of rape murder while Taggart was working undercover.

But though the courts see Taggart as innocent, the public does not, and Taggart’s chief (Jeffery Wright) and Mayor Hostetler (Russell Crowe) tell him to resign.

Seven years since the hearing and his resignation, Taggart has built up a private investigator service, which basically entails him catching cheating spouses in the act and then hounding past clients for his due. In the lastminute throws of a mayoral election, he gets a call from Mayor Hostetler, asking him to track down his wife’s lover so her affair could not be used against him in the political mudslinging.

What Taggart thinks he finds — the mayor’s wife (Catherine Zeta-Jones) getting cozy with the campaign manager (Kyle Chandler) of Hostetler’s opponent (Barry Pepper) — turns out to be far from the truth. The situation unravels quickly as the campaign manager turns up dead, Taggart is fingered for an accessory to murder and then is shot at as he tries to retrieve evidence that could solve the mystery.

The movie is briskly paced and turns made just fast enough to bring the viewer along without leaving them in the dust or bored. For better or for worse, nearly every cliché is here, including the ex-cop with a chip on his shoulder, the too-goodto- be-true public official, the neglected wife with a secret and the red herring affair.

There aren’t many plot holes, but the occasional breach in logic or tempo distracted from the otherwise decent detective film. But as long as you don’t think too much, or mind fairly liberal use of profanity, you could do worse than “Broken City.”

It’s eye for an eye, tooth for a tooth, fire fighting fire in this blood-soaked tale about a small band of cops taking down a vicious mobster’s empire. Very loosely based on actual events, “Gangster Squad” takes viewers along for the ride and doesn’t pull any punches.

Set in 1949 Los Angeles, we first meet Mickey Cohen (Sean Penn) as he’s disposing of a rival gangster by tearing him in two with a couple of sweet classic cars. We meet his foil, ex-military intelligence detective John O’Mara (Josh Brolin) when he beats the living tar out of a few of Cohen’s cronies who were trying to gang-rape an aspiring starlet. Most of the police, and almost all of the public officials, have been bought by Cohen, but O’Mara’s chief (Nick Nolte) tasks O’Mara with taking a few of the remaining straight cops and taking down Cohen using guerilla tactics. Assisted by his wife, Connie (Mireille Enos), O’Mara recruits knifeman Coleman Harris (Anthony Mackie), brainy Conway Keeler (Giovanni Ribisi) and quick-draw Max Kennard (Robert Patrick), who brings along his partner, Navidad Ramirez (Michael Peña). Another cop, Jerry Wooters (Ryan Gosling), eventually acquiesces to join the motley crew.

It takes a little trial and error, but they finally nail down enough cooperation and routine to achieve their quick, damaging strikes on Cohen’s operations. Along the way, Wooters falls for Cohen’s girl, Grace Faraday (Emma Stone), which both puts the group in greater danger and gives them a slight leg up on Cohen. But Cohen is every bit as smart as he is cruel, and goes on the offensive against them, as well.

The costuming and styling are great, and gives a great vibe to the flick, especially the veritable fleet of gorgeous Fords, Oldsmobiles, Plymouths and other classics from the 1930s and 1940s (for car-lovers, one of the most painful moments of the movie may be watching them crash and burn). The performances were also great all around, which is to be expected with the heft of talent here, and everyone is clearly having fun.

On the other hand, the storytelling failed to give the characters enough depth and self to make almost any of them sympathetic to the audience, or to make their peril worrisome for viewers. The amount of gore could also be distracting to some, so squeamish people should think twice about going. If you can get past that, though, “Gangster Squad” is more than happy to take you along for the ride.