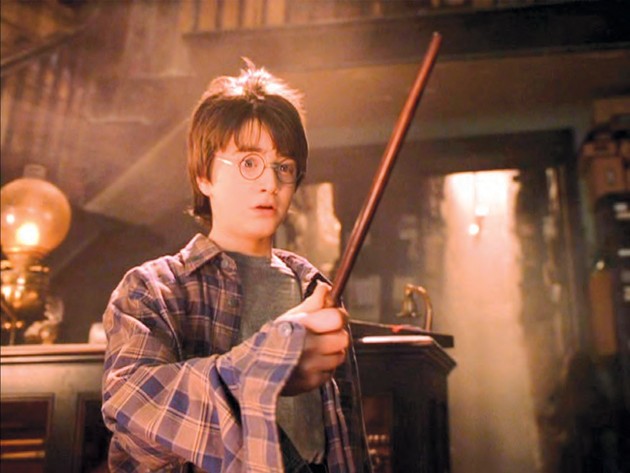 Daniel Radcliff, as orphaned Harry Potter, picks up a wand for the first time in 2001’s “Harry Potter and the Sorcerer’s Stone.” courtesy Warner Bros.

January 10, 2013
Warm up this winter with these unconventional movie marathons

In the bleak, frigid days of midwinter, sub-freezing temperatures can make going outdoors prohibitive and staying indoors more inviting. Unfortunately, this is also the time of year when good, new movies tend to be few and far between.

What this time of year really calls for is a movie marathon.

Sure, you could go with Clint Eastwood Westerns or films scored by John Williams (those would take up a whole week each), or you could get a little creative with the night’s lineup. Below are some suggestions, but tailor them to your own tastes and come up with your own themes.

Filmed at the Quality Cafe

Tucked away on a street in Los Angeles is a diner that stopped serving food in 2006, but nonetheless is probably one of the most recognizable places in the country — and you didn’t even know it. The Quality Cafe has been the backdrop for dozens of movies and TV shows. Don Draper from “Mad Men” ate there, and Gary Sinise’s “CSI:New York” team even dropped by, despite it being 3,000 miles outside of their jurisdiction. With just enough ’50s chrome to invoke cravings for chocolate sodas, but not enough to be garish, the defunct diner apparently embodies Americana.

You know the drill — the big conflict central to the plot cannot actually be solved — or, in some cases, fully discovered — until a team is formed and gets a sense of unity, thereby becoming greater than the sum of its parts. Many “group” superhero movies fall into this category, as well as some sports films.

Again, this is a very common trope in superhero movies, though more often used in those with solo characters, rather than team players. This is also common in adaptations of classic literature, such as “Oliver Twist,” or “Annie,” if we can stretch the definition of “literature” far enough to cover comic strips.

Any “Batman,” “Superman” or “Spiderman” movie

I’ll admit, “The Big Bang Theory” gave me this one. Yes, there are a few good films that just never caught on, such as Disney’s expensive flop “John Carter,” and situations where, say, a star signed onto another movie and thus ended the series, such as Chris Evans leaving “Fantastic Four” for “Captain America.” But most of them are pretty solid stinkers (cough, cough, “Catwoman,” cough). Unfortunately, you could spend all winter on this list. Watch with a group and go all “Mystery Science Theater 3000” on it.

Movies almost not made

The fact of the matter is that, for a variety of reasons, only a tiny fraction of the screenplays written and submitted to studios ever get made. Most of the time, this is a good thing and drastically limits the number of bombs to hit movie theaters. Sometimes, though, great movies, classic movies, just barely escape that fate.

One of the biggest cinema stars, and one of the greatest composers of the century, teamed up exactly three times in film, and every one of them is great.

Based on a TV Series

While not common, franchises occasionally make the jump from the small screen to the big screen. Often the movies are remakes of classic shows, such as “Bewitched,” “The Addams Family” or “21 Jump Street.” Yet sometimes they are released in conjunction with a current or recent series, such as Joss Wheadon’s “Firefly” companion, “Serenity.” They seldom require intimate knowledge of the series, but it usually helps. There are also full-length films based on comedic sketches, such as “Wayne’s World” or “MacGruber.”