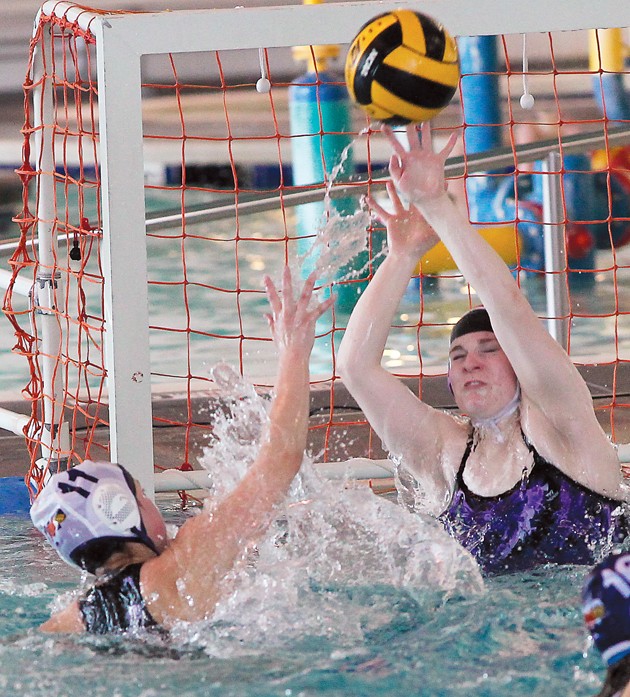 Tooele Water Polo team member Kirsten Asher (11) takes a shot on Sophie Condie Tuesday during the Purple and White game at Pratt Aquatic Center. The team begins its season this weekend at a tournament in Cedar City.

Unlike other spring sports teams, waiting around for good weather is not a problem for the Tooele water polo team.

Both the boys and the girls teams tuned up for the season with Purple and White games Tuesday afternoon at Pratt Aquatic Center.

“We should have a great team this year because we have a lot of seniors returning who mesh well out there. We should make it to the state tournament,” said fifth-year player Brandon Johnson.

The season kicks off this Friday and Saturday when the teams travel to Cedar City for a tournament.

“The league is a little different this year with a West Division and an East Division with 12 teams in each division,” said coach Dave Philpot. “ Each team plays at least one game against the other teams in their division. Four teams from each division makes it to the state tournament and we should be one of the four from the West Division.”

Crunch time comes in March with the Western Division Championships will be held May 9-11 at Kearns or the Steiner Aquatic Center in Salt Lake City. The State Tournament is set for Kearns May 16-18.

Tooele will play most of its matches on the road this year because Pratt Aquatic Center is only available from 3 p.m. to 5 p.m. for games, and opponents do not want have to travel to start that early. Tooele will host Delta on April 30 at 3 p.m.

Philpot said top contenders for a state title are Kearns, Murray, Cottonwood and his Tooele team.

“I really like playing water polo because it’s much more of a team sport than swimming,” Johnson said. “You need to be diverse and use a variety of skills out there all in unison with your teammates.”

The sport can also be a little rough.

“It can get physical out there. It’s like playing rugby in the water or wrestling in the water sometimes. There’s not a game when I don’t get hit at least a couple of times,” Johnson said.