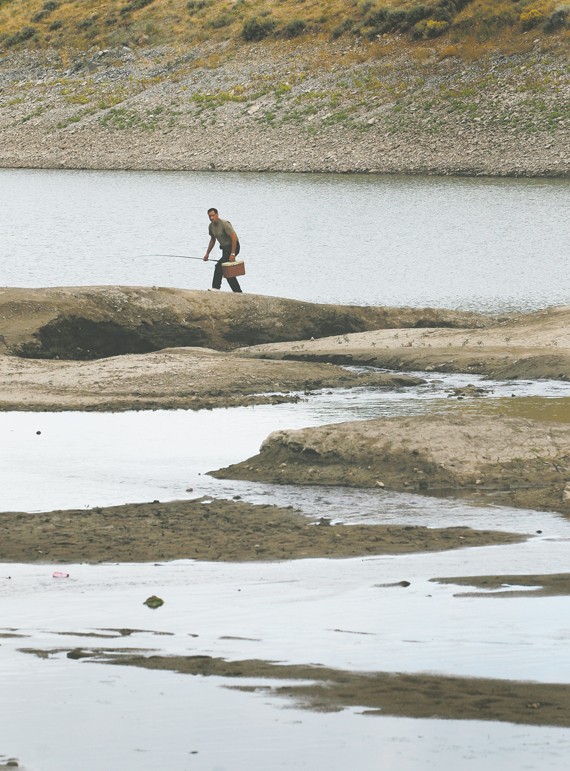 Mark Sandoval walks along the bank of Settlement Canyon Reservoir Tuesday morning. The reservoir is at 30 percent of capacity.

Despite a wet winter and spring, Tooele County dried out over the summer, finishing the official water year slightly below average.

“We bounce around in the 80 percent to 120 percent range most frequently,” he said.

Those low numbers are typical at this time of the year. In addition, Vernon Reservoir was drained, beginning in mid-September, to clear out debris blocking the reservoir’s outlet to allow for better water flow. “Snowfall-wise we actually did OK,” he said. “We were close to average there as well.”

Julander is paying attention to several climatic trends that could affect the water year ahead.

The Pacific Decadal Oscillation (PDO) — an index based on variation patterns in sea surface temperature — has shifted from a warm phase to a cold phase, Julander said. “Typically when that happens you get more snow on average in the Pacific Northwest,” he said, adding that may lead to more precipitation in Utah. “We’ll see what it brings to us as well.”

However, Julander said since Utah is in a neutral zone, “sometimes El Nino/La Nina hits us hard and sometimes they don’t. The same is true for PDO. Sometimes it comes in big time, sometimes it just kind of fades along.”