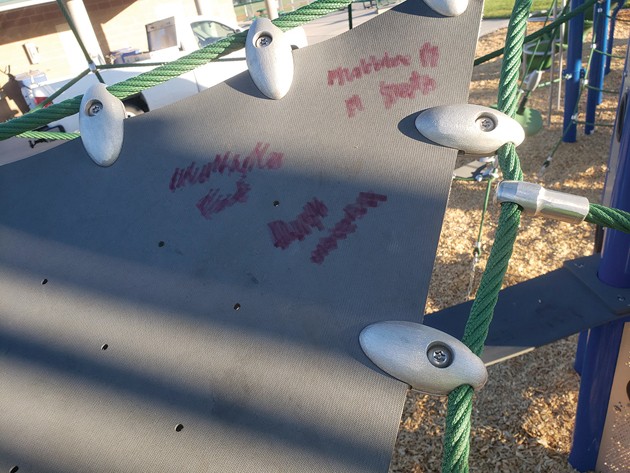 Mayor asks for public’s help to deter and catch vandals ♦

An increase of vandalism in Tooele City has caused the mayor to offer a reward to anyone with information leading up to the arrest of vandals who have hit  the city parks and facilities, according to Darwin Cook, Tooele City Parks and Recreation director.

Vandalism has always been present in the city parks and facilities but Cook said that it has become worse lately with children being out of school.

“I think it has a lot to do with school being out right now,” he said. “Right now, the vandalism has escalated dramatically compared to before.”

Cook said that graffiti has been an issue, but it’s not the biggest vandalism issue they are facing.

“We have been receiving a lot of graffiti on buildings and on the concrete at the skatepark,” he said. “This isn’t even our biggest issue though.”

One of the biggest issues is broken door handles and doors at the Dow James Building, according to Cook.

The city has had to use taxpayer money to replace all five doors in the bathrooms at the building.

It cost $5,000 of city taxpayers money to replace the dispensers.

“Someone also climbed up on the roof of the Dow James building and drove golf tees in the roof and they have been hitting golf balls off of the roof,” stated Cook. “It may cost $1,000 to repair the roof.

And it’s not just the Dow James Building, according to Cook.

“We have five bathrooms in the city that don’t have sinks, because the vandals have destroyed them,” he said. “When they were destroyed, the city did not have the budget money to fix them, but now we are working on bids to be able to fix them.”

Cook also said that vandals have been breaking into the bathrooms and clogging the toilets with garbage and toilet paper, along with destroying sprinkler heads and cutting wires in the control boxes for the sprinklers at city parks.

“We have noticed that most of this vandalism is taking place in the middle of the night,” Cook said. “We would love to not have to lock the bathrooms at night during the season, but the problem is if they are left open, it gets worse.”

The mayor is offering a $250 reward to anyone with information leading to the arrest of the vandals.

“We need the public to be vigilant and if they see something not quite right or see someone vandalizing something at the park, they need to call the police,” said Cook. “I hope as a community we can start respecting property more, so our staff can focus on other responsibilities they have. Everyone just needs to come and use the parks respectfully, so that other people can use them.”

One thought on “Wave of vandalism in Tooele City parks”