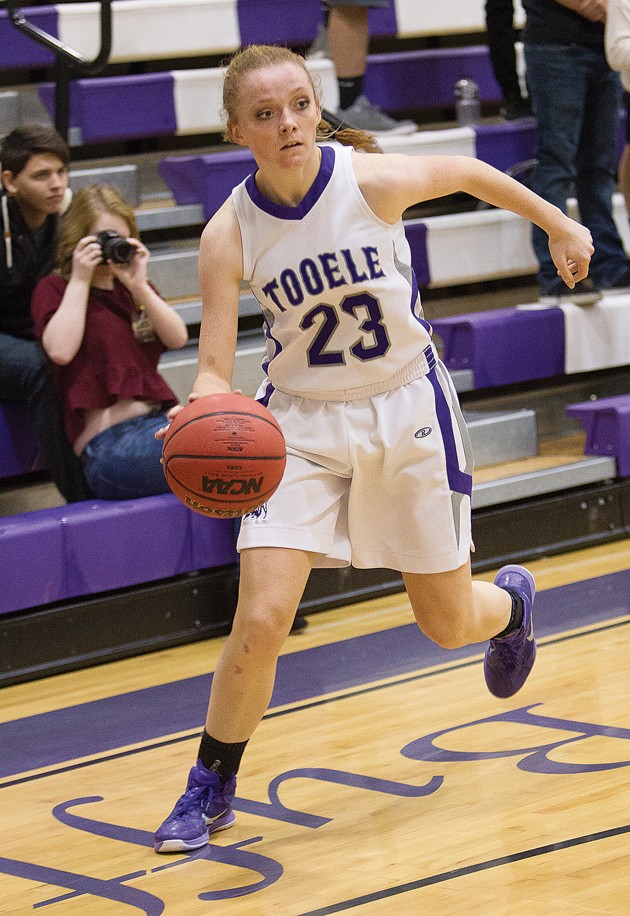 Tooele junior forward Emily Webber (23) looks to pass during a home game earlier this season at Tooele High School. Webber was named the 2016-17 winner of the Jackie White-Kimber Award, which is given annually to a THS girls basketball player who demonstrates excellent on-court performance, team leadership and character.

The junior averaged more than 15 points per game and was recently named to the Tooele Transcript Bulletin All-County Team and the All-Region 10 Second-Team. In head coach Randy Goss’ first season with Tooele, Webber was the leading scorer and helped the Buffaloes win seven games  and secure the region’s No. 4 seed into the Class 3A state playoffs — both of which were improvements over last season.

Webber was honored last month with the Jackie White-Kimber Award, which is given annually to the Buffalo girls basketball player who displays the best leadership skills and character while still being an integral part of the Tooele basketball team.

“I’m just really thankful. It’s just an honor to be on there, and I’m really excited,” Webber said.

The award is named after former THS basketball player Jackie White-Kimber, who died in 1988 after a battle with cancer. Susan Rydalch, a former coach at Tooele, personally selects each winner.

“The games that I saw her play, for being a junior I thought she really had the composure,” Rydalch said. “She’s a great young lady. I’m proud of her and I think Jackie would be proud.”

“Emily is showing up every game,” Goss said. “She comes to play every game, she doesn’t really have an off game.

“She has a winning attitude,” he added. “She goes out, gives it her best every game.”