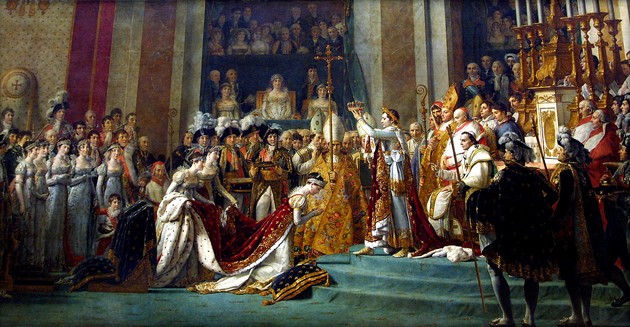 • On Dec. 2, 1804, Napoleon Bonaparte is crowned Napoleon I, the first Frenchman to hold the title of emperor in a thousand years. After suffering military defeats, Napoleon was exiled to the island of Saint Helena off the coast of Africa.

• On Dec. 4, 1917, psychiatrist W.H. Rivers presents his report, The Repression of War Experience, based on his work at Britain’s Craiglockhart War Hospital, where soldiers who suffered from psychological traumas were treated. By the end of World War I, the army had dealt with 80,000 cases of “shell shock.”

• On Dec. 6, 1933, a federal judge rules that “Ulysses” by James Joyce is not obscene. The book had been banned in the United States and England when it came out in 1922. While in college, Joyce began a lifetime of literary rebellion when he self-published an essay rejected by the school’s literary magazine adviser.

• On Dec. 5, 1941, the USS Lexington, one of the two largest U.S. aircraft carriers employed during World War II, makes its way across the Pacific to carry a squadron of dive bombers to defend Midway Island from a Japanese attack. The Lexington never made it to Midway Island; it turned back when it learned that the Japanese fleet had attacked Pearl Harbor.

• On Dec. 1, 1959, Antarctica is made a military-free continent. Twelve nations, including the United States and the Soviet Union, signed the Antarctica Treaty, which bans military activity and weapons testing on that continent.

• On Dec. 3, 1967, 53-year-old Lewis Washkansky receives the first human heart transplant in South Africa. After surgery, he was given drugs to keep his body from rejecting the heart. The drugs left him susceptible to sickness, however, and 18 days later he died from double pneumonia.

• On Dec. 7, 1987, despite protests in Washington concerning Soviet human-rights abuses, most Americans get swept up in “Gorbymania” as Soviet leader Mikhail Gorbachev arrives for his summit with President Ronald Reagan. Gorbachev and his wife, Raisa, charmed the American public and media.