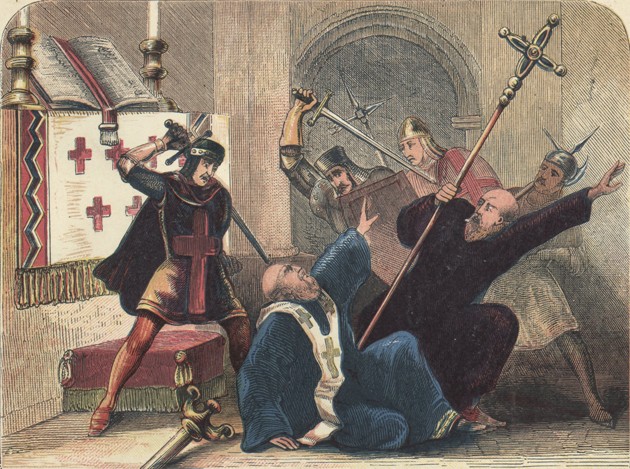 • On Dec. 29, 1170, Archbishop Thomas Becket is murdered in Canterbury Cathedral by four knights on orders of King Henry II of England. The Christian world was shocked by Becket’s death, and in 1173 he was canonized a Catholic saint. In 1174, Henry was forced to do penance at his tomb.

• On Dec. 31, 1879, in the first public demonstration of his incandescent light bulb, inventor Thomas Alva Edison lights up a street in Menlo Park, New Jersey. The Pennsylvania Railroad Company ran special trains to Menlo Park in response to public enthusiasm over the event.

• On Dec. 30, 1936, in one of the first sit-down strikes in the United States, autoworkers occupy the General Motors Fisher Body Plant in Flint, Michigan. In all, the strike lasted 44 days. Among other things, the workers were given a 5 percent raise.

• On Jan. 3, 1952, Sergeant Joe Friday’s police drama “Dragnet” comes to television. A popular radio series since 1949, it became one of the first TV series filmed in California, instead of New York. It began a long line of crime and police dramas, continuing into the present with “Law & Order” and “CSI.”

• On Jan. 2, 1981, Peter Sutcliffe, the Yorkshire Ripper, is captured by British police, ending one of the largest manhunts in history. For five years, investigators had pursued every lead in an effort to stop the serial killer. Sutcliffe himself was interviewed nine times. When Sutcliffe was finally convicted, he had killed 13 women.

• On Jan. 4, 1999, for the first time since Charlemagne’s reign in the ninth century, Europe is united with a common currency when the “euro” debuts. Eleven European Union nations launched the currency in the hopes of increasing European economic growth.