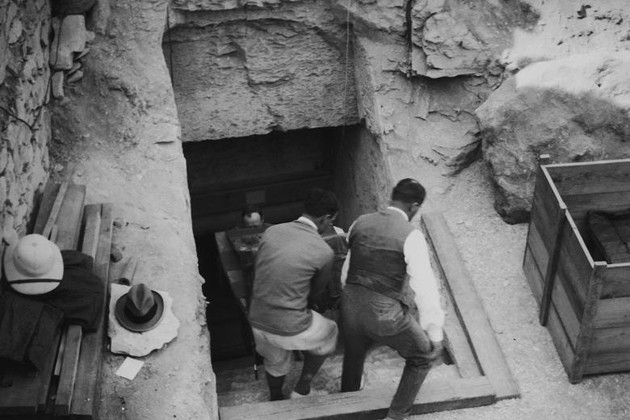 King Tutankhamen's tomb in Egypt's Valley of the Kings, 1922.

• On Nov. 26, 1922, in Egypt’s Valley of the Kings, British archaeologists become the first souls to enter King Tutankhamen’s tomb in more than 3,000 years. Inside was a collection of several thousand priceless objects, including a gold coffin containing the mummy of the teenage king.

• On Nov. 24, 1932, the FBI crime lab opens in Washington, D.C. The lab was chosen because it had the necessary sink. It was operated out of a single room with one full-time employee who began with a borrowed microscope.

• On Nov. 27, 1942, French Admiral Jean de Laborde sinks the French fleet anchored off the southern coast of France to keep it out of German hands. Laborde ordered the sinking of eight cruisers, an aircraft transport, 30 destroyers and 16 submarines.

• On Nov. 30, 1950, President Harry Truman announces that he is prepared to authorize the use of atomic weapons in order to achieve peace in Korea. At the time, communist China had joined North Korean forces in their attacks on United Nations troops, including U.S. soldiers in South Korea.

• On Nov. 29, 1963, one week after President John Kennedy was fatally shot while riding in a motorcade in Dallas, President Lyndon Johnson establishes a commission to investigate the assassination. The Warren Commission concluded that there was no conspiracy. In 1978, the House Select Committee on Assassinations concluded that Kennedy was “probably assassinated as a result of a conspiracy” that may have involved multiple shooters and organized crime.

• On Nov. 28, 1979, a New Zealand sightseeing plane traveling over Antarctica crashes, killing all 257 people on board, after the pilot descended to 1,500 feet. The pilot didn’t know that his descent came right as the plane reached Mount Erebus, a 12,444-foot volcano.

• On Nov. 25, 1980, Sugar Ray Leonard regains boxing’s welterweight title when his opponent, reigning champ Roberto Duran, waves his arms and walks away from the fight in the eighth round. “No mas, no mas,” Duran told the referee. “No more box.”