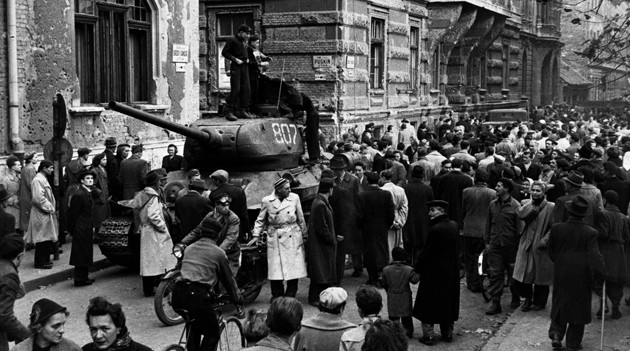 • On Nov. 6, 1789, Pope Pius VI appoints John Carroll bishop of Baltimore, making him the first Catholic bishop in the United States. He oversaw the creation of leading Catholic institutions, including the nation’s first Catholic university, Georgetown University, founded in 1789.

• On Nov. 7, 1885, at a remote spot called Craigellachie in the mountains of British Columbia, the last spike is driven into Canada’s first transcontinental railway. Despite the logistical difficulties posed, the almost 3,000-mile-long railway was completed six years ahead of schedule.

• On Nov. 9, 1946, the Notre Dame Fighting Irish and the Army Cadets play to a historic 0-0 tie at Yankee Stadium in New York. Notre Dame-Army was college football’s biggest rivalry. Football tickets typically cost $1 to $5, but many fans had paid scalpers as much as $250, equal to $3,200 in today’s dollars.

• On Nov. 4, 1956, a spontaneous national uprising that began 12 days before in Hungary is viciously crushed by Soviet tanks and troops. Thousands were killed and wounded, and nearly a quarter-million Hungarians fled the country. The Soviet action stunned many in the West, as Soviet leader Nikita Khrushchev had pledged a retreat from the Stalinist repression of the past.

• On Nov. 3, 1964, residents of the District of Columbia cast their ballots in a presidential election for the first time. The passage of the 23rd Amendment in 1961 gave citizens of the nation’s capital the right to vote for a president and vice president.

• On Nov. 8, 1974, Salt Lake City resident Carol DaRonch narrowly escapes being abducted by serial killer Ted Bundy. When Bundy was finally captured in 1978 in Florida, he confessed to the murders of 28 women, and was executed in 1989.

• On Nov. 5, 1994, George Foreman, age 45, becomes boxing’s oldest heavyweight champion when he KOs undefeated 26-year-old Michael Moorer in the 10th round of their WBA fight. Foreman dedicated his upset win to “all my buddies in the nursing home.”