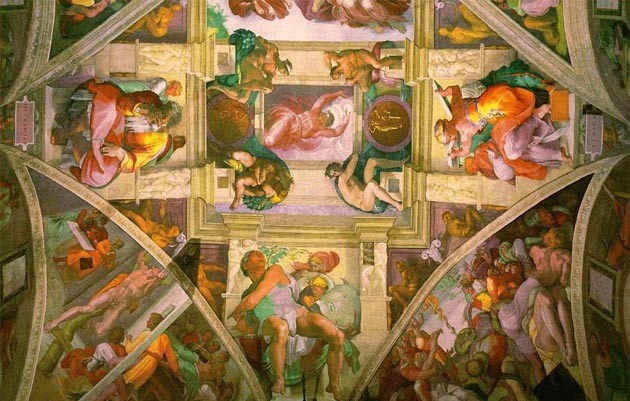 A part of the ceiling of the Sistine Chapel in Rome.

• On Nov. 1, 1512, the ceiling of the Sistine Chapel in Rome, one of Italian artist Michelangelo’s finest works, is first exhibited to the public. Michelangelo’s epic ceiling frescoes consist of nine panels devoted to biblical world history. The most famous of these is The Creation of Adam, a painting in which the arms of God and Adam are stretching toward each other.

• On Oct. 27, 1858, Theodore Roosevelt, the future 26th president of the United States, is born in New York City. As president, he insisted on a strong navy, encouraged the construction of the Panama Canal and set aside land for America’s first national parks and monuments.

• On Oct. 29, 1915, President Woodrow Wilson assured social activist Jane Addams that he had no intention of leading the U.S. into war; he was re-elected on the slogan “He Kept Us Out of War.” By April 1917 Wilson delivered his war message to Congress and the U.S. entered World War I.

• On Oct. 31, 1961, five years after Soviet leader Nikita Khrushchev denounced Stalinism, Joseph Stalin’s embalmed body is removed from public display in Lenin’s tomb in Moscow’s Red Square. When Vladimir Lenin died in 1924, he was embalmed and placed in a mausoleum featuring glass casing.

• On Oct. 30, 1974, 32-year-old Muhammad Ali becomes the heavyweight champion of the world for the second time when he knocks out 25-year-old champ George Foreman in the “Rumble in the Jungle.” Seven years before, Ali had lost his title when the government accused him of draft-dodging.

• On Nov. 2, 1983, President Ronald Reagan signs a bill designating a federal holiday honoring Martin Luther King, Jr., to be observed on the third Monday of January. King was awarded the Nobel Peace Prize in 1964.