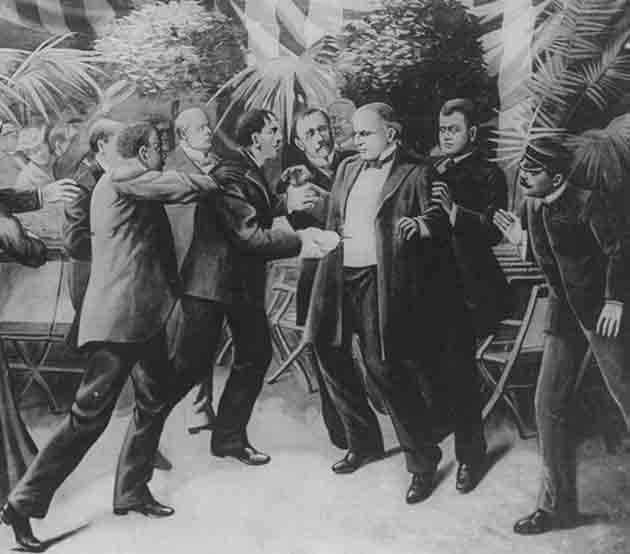 • On Sept. 14, 1901, U.S. President William McKinley dies after being shot twice by a deranged anarchist. One bullet deflected off a suit button, but the other entered his stomach, passed through the kidneys and lodged in his back. When he was operated on, doctors failed to find the bullet, and gangrene soon spread throughout his body.

• On Sept. 15, 1935, German Jews are stripped of their citizenship, reducing them to mere “subjects” of the state. German Jews were excluded from a host of high-profile vocations, from public office to journalism, radio, theater, film and teaching — even farming. Jews found it difficult to buy food, as stores would not admit Jewish customers.

• On Sept. 9, 1942, in the first and only air attack on the U.S. mainland in the war, a Japanese floatplane drops incendiary bombs on Oregon’s Mount Emily, setting fire to a state forest. The president immediately called for a news blackout for the sake of morale.

• On Sept. 12, 1951, former middleweight champion Sugar Ray Robinson defeats Randy Turpin to win back the belt at the Polo Grounds in New York City. Robinson, a New York City native, had lost the belt to Turpin two months prior in Turpin’s native London.

• On Sept. 10, 1977, at Baumetes Prison in Marseille, France, Hamida Djandoubi, a Tunisian immigrant convicted of murder, becomes the last person executed by guillotine. In 1981, France abandoned the guillotine forever.

• On Sept. 13, 1989, Hurricane Hugo approaches the Leeward Islands. Over the next 12 days, the category 4 storm would kill 75 people from the island of Guadeloupe to South Carolina. The environmental toll in the Carolinas was severe, and one national forest lost about 70 percent of its trees.

• On Sept. 11, 1991, a Continental Express commuter plane crashes near Houston as it prepares to land, killing 14 people. Short of workers, an inspector had been drafted to assist the afternoon maintenance crew. The inspector worked on putting the screws on the plane’s horizontal stabilizer, but did not finish the job.