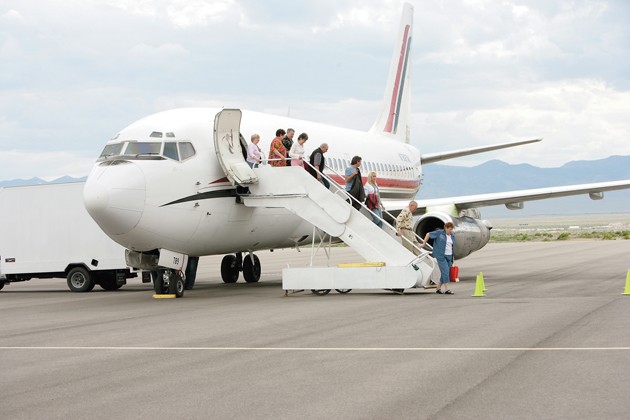 Passengers get off of a plane at Wendover Airport in May 2005. The airport has been operating in the black and netted more than $500,000 revenue in 2011.

The airport, also known as Wendover Historical Airfield, has been owned and operated by the county since Wendover City asked the commissioners to take it over in 1998.

The once struggling airport, however, is now operating in the black.

The 2013 Tooele County budget shows the Wendover Airport will net $296,000 in cash before depreciation in 2013, according to Tooele County Auditor Mike Jensen.

Although Wendover Airport is operating in the black, the commissioners may find other options for airport operations as they work to eliminate non-essential services from the county budget.

“I’m not saying we are ready to sell or give away the airport right now,” said Bruce Clegg, commission chairman. “We are looking at options. If there is a way to privatize the airport, then that is something we need to consider.”

Air traffic at the airport has rebounded since 1997 when the Federal Aviation Administration closed the airline that flew customers into the Utah-based Wendover airport.

Back in the 1990s, Wendover City embarked on an ambitious plan to extend one of the airport’s runways to 8,000 feet to allow larger airplanes to land there.

The city had arranged an FAA grant of $5 million to pay for most of the new runway. Release of the grant money was tied to $1.7 million in local funding.

Wendover City’s plan was to bond for the $1.7 million using airport fees to secure the bonds.

Wendover City was left with a little more than $3 million owed to the contractor that had already started work on the runway extension—but now they had no flights and no money.

After an appeal to the Utah State Legislature was turned down, county commissioners stepped in and took over the airport.

The county was able to bond for the $1.7 million, the federal grant was released and the runway extension completed.

The airport is currently extending another runway by 2,000 feet. The cost for the runway project is being paid for by an FAA grant and Nevada casinos, according to Brown.

The runway extension will help the airport’s bottom line by allowing it to sell more fuel.

While the airport takes in more money than it spends, the extra cash is not available to the county’s general fund.

The 2011 financial statement indicates $428,521 in unrestricted cash assets at the end of the year in the airport fund.

Payments for the $1.7 million in bonds that the commissioners took out in 1998 when the county acquired the airport are taken from the airport enterprise fund account. In 2012 those bonds payments were $160,000.

The airport enterprise fund does not receive money from the county’s general fund, and has no obligation due to other county funds, according to Jensen.

The payoff for the county and Wendover City is employment opportunities from the airport and spillover customers in Wendover, Utah hotels and restaurants, according to Clegg.

The foundation has income from sales at the museum, the air show, private donations and grants, according to the foundation’s Internal Revenue Service filings.

While the airport is self-sustaining, the county commissioners are still interested in investigating privatizing the airport.

“If we find that the airport can be privatized and continue to grow, that would most likely be the best option,” said Clegg.