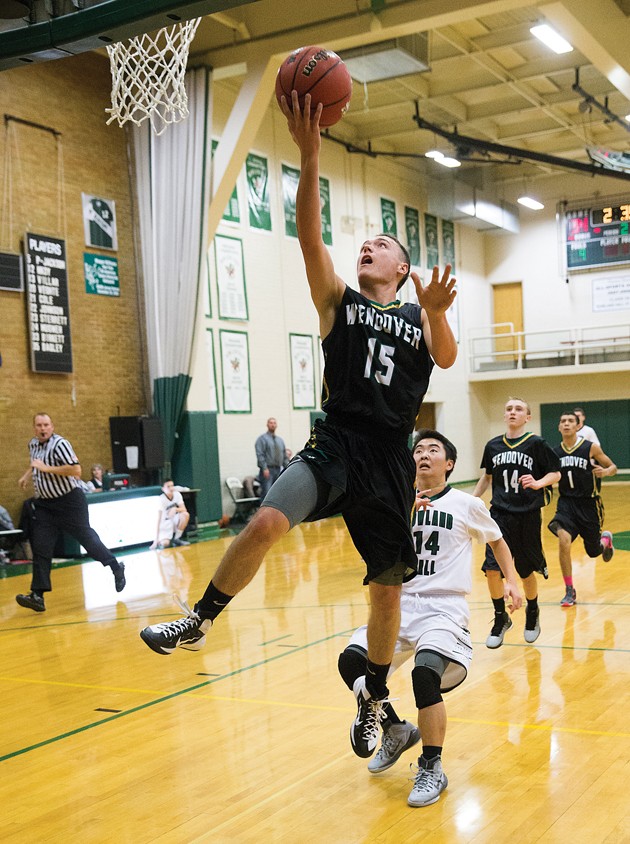 Wendover’s Dallan Murphy (15) scores two against Rowland Hall. The Wildcats fell to the Winged Lions with a final score of 70-48.

If it hadn’t been for a disastrous first quarter, the Wendover boys basketball team would have given Class 2A Rowland Hall all it could handle Wednesday night in Salt Lake City.

Instead, the Wildcats spotted the Winged Lions a 22-point advantage, and never were able to recover in a 70-48 non-region loss, dropping Wendover to 1-4 on the season.

“Right at the first, they just got the jump on us,” Wildcats coach Kyle Murphy said. “Position was killing us. We need to get better position rebounding.”

Rowland Hall (3-1) wasted no time gaining the upper hand on its undermanned opponent, surging to a 7-0 lead in the first 52 seconds before Murphy called a quick timeout. Conner Kennedy came up with the Wildcats’ first bucket of the night with 6:37 left in the opening quarter, but the Lions came back with 19 unanswered points to gain a stranglehold on the game.

Damion Valadez broke the Wildcats’ drought with a pair of free throws with 43.5 seconds left in the quarter. Wendover didn’t convert on another field-goal attempt until the 6:29 mark of the second quarter, when Uriah Trammel made it 28-4.

Trammell’s bucket sparked a 21-6 run that allowed the Wildcats to pull within 11 points with 1:41 left in the first half.

“It looked like we just woke up,” Murphy said, noting his team may have been a bit weary from the long bus trip on Interstate 80. “We ran our plays and had confidence in our shots.”

That was as close as Wendover would get, as Rowland Hall stretched the lead back to 14 points at halftime and opened the second half on a 12-2 run that put the game out of reach.

Valadez led all scorers with 23 points for the Wildcats. Dallan Murphy had 11, while Kennedy had six and Jesus Barboza, Jose Carrillo and Trammell each had two.

Rowland Hall hit 11 3-pointers on the evening, led by freshman Leif Thulin’s five. Thulin and Kyle Eng each had 17 points to lead the Winged Lions, while Luke Roberts had 13 points, including four 3-pointers. Chris Diehl had 11 points for Rowland Hall.

The Wildcats, who are accustomed to long road trips, will hit the road for the 1A Preview this weekend in Richfield. Wendover will face Tabiona on Friday before meeting Escalante on Saturday.