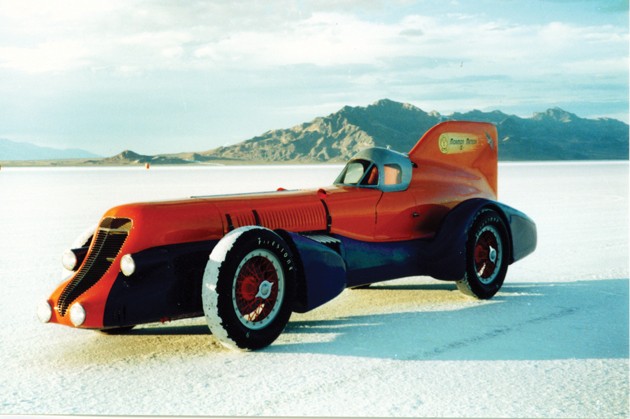 Wendover generally shows up on maps as a small black dot in the middle of the Great Basin Desert.

However, author and history buff Ronald R. Bateman painted a colorful history of the small town on the western edge of Tooele County when he addressed the Tooele chapter of the Sons of Utah Pioneers earlier this month.

Bateman, author of “Wendover – Winds of Change,” shared a wide array of stories and little known historical tidbits with the group of about 50 members.

Included in his presentation was how Wendover grew from a lawless railroad camp on the Utah/Nevada border over 110 years ago to the gambling mecca that it has become today.

Wendover sprung up in 1907 when Western Pacific railroad tracks reached the Utah-Nevada state line and a water tower was constructed.

In the following years, a store opened, mining claims filed, and a postmaster appointed.

Ab Jenkins, who would become a world-renowned racecar driver, sped 60 miles per hour on a motorcycle across the salt flats in 1910, just a few miles northeast of Wendover.

As early as 1914, a great tradition kicked off when Teddy Tezlaff logged the first unofficial speed record of 141.73 mph on the Salt Flats.

Wendover also played a key role in the advancement of transportation and communication in the early years of the 20th Century.

The final splice in the coast-to-coast telephone line was made at Wendover in 1914 and four years later, a study recommended a highway route to California be constructed through the desert town.

Much of the development and growth of Wendover can be traced to an unemployed mechanic who was thrown off the train a few miles east of town in 1924 when he was unable to pay the fare.

After brushing himself off, Bill Smith soon found a job at a nearby potash plant and saved over $500 over the course of two years before opening a gas station with a partner.

He soon hung a light bulb in front of the service station that he kept burning 24 hours daily to signal a friendly oasis on the desert.

It was the beginning of the famed State Line Hotel and Casino.

When gambling became legal in Nevada in 1931, Smith and his partner Herman Eckstein, installed a roulette table, and their Cobblestone gas station became one of Nevada’s first gambling establishments.

With the entrance of the United States into World War II, Wendover took on greater importance.

It was the Army Air Force’s largest bombing and gunnery range. In 1942, the Army Air Force activated Wendover Army Air Field and assigned the research and development of guided missiles, pilotless aircraft, and remotely controlled bombs to the site.

By late 1943, Wendover was the training base for B-17 and B-24 bomber crews and there were some 2,000 civilian employees and 17,500 military personnel stationed in the desert town.

These are just some of the pieces of history attached directly to Wendover that Bateman shared with the local chapter during his presentation.

The Sons of Utah Pioneers meet the first Thursday of every month at the Tooele 4th Ward building, 192 W. 200 South.