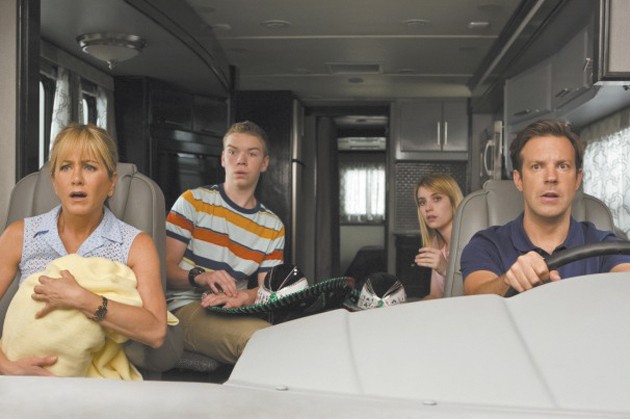 Jennifer Aniston, left, Will Poulter, Emma Roberts and Jason Sudeikis pose as a family in order to look less suspicious as they smuggle drugs from Mexico to the U.S. in the tragically unfunny “We’re the Millers.” photo courtesy Warner Bros.

If you’ll notice, the common element between both of those kinds of successful comedies were that they were funny. But I guess if you’re not funny, you’ll be offensive no matter how raunchy you are, in a way.

But “We’re the Millers” goes overtime to offend its viewers with both a script utterly devoid of anything remotely resembling humor, as well as filling it chock-full of tasteless excuses for gags.

I didn’t like this movie so much. Can you tell?

The premise sounds like it could make for a decent comedy: A drug dealer (Jason Sudeikis) is robbed and is sent by his boss (Ed Helms) on a run across the U.S.-Mexico border for a load of weed to make up for his loss in product and proceeds.

In order to make himself look less like the shady drug-dealer he is, he recruits his stripper neighbor (Jennifer Aniston), an idiot neighbor kid (Will Poulter) and a teenage runaway (Emma Roberts) to pose as his family on vacation to Mexico. On the way back, they accidentally befriend a DEA agent (Nick Offerman) and his family (Kathryn Hahn and Molly Quinn), as well as invoke the wrath of a rival drug dealer (Tomer Sisley) and his crony (Matthew Willig). Shenanigans ensue.

Here are some of the high-larious situations encountered in “We’re the Millers”: trying to convince the idiot neighbor kid to perform a sexual act on a Mexican cop by way of a bribe; accidentally tossing a “weed baby” into traffic in front of the DEA agent and family, where it is run over repeatedly; escaping from the bad guys thanks to an impromptu striptease by the stripper; inadvertently propositioning the goofy DEA agent and his wife to “swing;” and an extremely sensitive area of one character being bit by a venomous spider.

The lowest-common-denominator nature and sexual flair to the gags would be one thing, but the insultingly bad script is another altogether. The pacing rushes through some sequences but lingers on others like it was written by someone who flunked out of Screenwriting 101. There are four people credited for the screenplay, so you’d think one of them would have realized how insipid it was, but then again, the two who also came up with the story — Bob Fisher and Steve Faber — also brought us “Wedding Crashers,” and the other two — John Morris and Sean Anders — were behind the magic of “Hot Tub Time Machine” and “Sex Drive,” so I guess it makes sense again — if you say they’re in a slump.

I haven’t even gotten to how wooden the dialogue sounds. Ed Helms’ character, the slick, uber-rich drug don who buys killer whales because he doesn’t like sports cars, was probably one of the least likable tools I’ve seen in ages, but in such a way that detracted from his role, if that’s possible. I kept hoping the bad guys would catch up with Sudeikis’ character and put us all out of that misery — and he’s supposed to be the good guy (kind of). You can make a lead character kind of a jerk who finds some kind of morality or selflessness at the end, but it really helps if the jerk is the least bit likable.

All of it’s pretty stupid, actually. And crude. Completely profane. And so many kinds of not funny.

But the thing is, there was some real potential with the cast here. Offerman kills it in “Parks and Rec,” Helms wasn’t always terrible on “The Office,” Sudeikis has had some really funny moments on “Saturday Night Live” and Aniston had “Friends,” so it’s not like these guys have never done comedy before.

I’ve been wracking my brain trying to think of positive things to say about this film. You know, the whole silver lining kind of thing. This is what I’ve come up with: The season premier of “Castle” is still more than a month away, so it was nice to see Molly Quinn…although I’m not sure I’ll be so excited to see her again after this (even though she personally was not offensively atrocious). Ken Marino, who played a rival PI in “Veronica Mars,” was even more slimy than in that role, so that was kind of nostalgic for me. And sometimes I almost felt like chuckling a tiny bit in some of the “family” situations — right before the show inevitably ruined its own almost-jokes.

So for making me sit through two hours without a single laugh, and for giving me a mad hankering for churros with no decent jokes to distract me, I give “We’re the Millers” two thumbs way down.