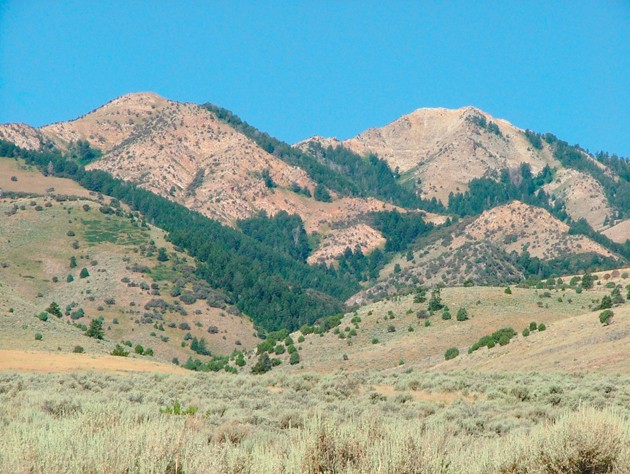 Pre-fire scene of entrance to West Canyon from the east. Most of the large conifers in the lower half of the canyon were not consumed in the fire, but higher up the destruction of the forest was complete.

May 16, 2013
West Canyon is a great destination for an early season or fall hike

“I stay a little longer, as one stays, to cover up the embers that still burn.”

A look directly west of Main Street in Grantsville is the Stansbury Mountain’s Onaqui Peak.

Onaqui is a Goshute Indian word associated with salt, but I’m not aware of any other details of its origin. At 9,143 feet above sea level, Onaqui is the highest peak in the northern end of the Stansburys, and just below its rocky summit to the south is West Canyon, one of my favorite canyons to hike in the Stansbury Range.

To get there, head west on Utah Highway 138, which is Grantsville’s Main Street and follow it around the bend out of town on the west side until you come to the sign that reads “Mack Canyon Road.” Turn left and follow this road for several miles up the sloping bench to the foot of the mountains.

This road can be quite rough in places and you may have to open a barbed wire/pole stock fence. These pole and wire gates are common throughout western rangelands. They oftentimes do not delineate private property but rather they are there to keep ranchers stock from wandering down into the valleys or into other places they shouldn’t go.

Be careful when you open these gates; there is a good amount of tension on them and the barbed wire can cut you. Pull the wire handle off of the top of the pole and all the tension releases on the gate and it collapses. Pull the collapsed gate to the side of the road, drive your vehicle through and then pull the gate back across the road and secure the wire handle back over the post. The tension will stand the fence up and close the gate.

It is common courtesy to keep these gates closed so make sure that you close them after every time you pass through. At the end of the road is the West Canyon Trailhead, which is large enough to accommodate several vehicles. I have hiked up West Canyon many times in all seasons and each different season has its own attraction.

Unfortunately, the Big Pole Canyon fire of 2009 burned the upper half of the canyon and that is regrettable because the view south from Box Canyon pass was one of my favorite scenes in the range. On my latest hike of this canyon, we started around 9:45 a.m. from the trailhead and it was already a hot day. We passed through the gate and headed up the two-track trail that dips into the dry creek bed and then emerges on the other side and bends to the south and up the canyon.

Not long after crossing the creek bed, we ran into a herd of the fattest, stinkiest, laziest and orneriest cows you have ever seen in your life. There were about 60 head and they were camped right in the middle of the trail — and were not prepared to move for any reason. It took a fair amount of hooting, hollering and clapping of hands to get these portly beasts to move so we could pass. They eventually moved and we made our way through their disgusting mess, all the while thinking about how these flea bitten, fly farmers end up as burgers. Suddenly I didn’t know if I ever wanted another Big Mac.

After we passed them they quickly resumed their place on the trail, as if they were reclaiming something that was rightfully theirs, and commenced to bawl, moo and scream in a comical chorus about how they had been wronged by us.

Not long after the great “Cattle” incident, I noticed a giant bug in the road and man was it ugly. It was a Carmel colored “Mormon Cricket” and this guy was fully grown. This was a solitary bug but back in the days of the pioneers, 1849 to be exact, these creatures covered the land in Salt Lake Valley like a biblical plague. It is said that flocks of gulls from the Great Salt Lake swooped in and devoured all of them, saving the crops of the fledgling colony. This incident is referred to by Mormons as the “Miracle of the Gulls”

After teasing the cricket for a bit we continued and soon passed the start of the Stansbury Front Trail. This trail runs south from this point all the way to Big Hollow near Johnson’s Pass. A bit beyond this trail junction is a small spring with a water tank on the south side of the canyon. There is always water here but it is completely fouled by livestock so make sure you bring your own.

At about 1.6 miles from the trailhead we came to some large Douglas fir and a heavily forested canyon of good size. I call this left fork of West Canyon. Continuing west the canyon opens into a small valley or bowl that is covered with large sagebrush with good views of Onaqui Peak to the northwest. I call this pleasant place “West Canyon Bowl.”

At about two miles from the trailhead the trail seemingly ends at an old camp of sorts where there are a few concrete foundations and an old bullet holed antique stove. The trail to this point is an easy to follow two track, but after this it narrows to a single path, crosses the creek bed and enters the dense burned out skeleton fir forest on the south side of the canyon.

We continued west up through this forest and then the trail switches back to the southeast, passes some picturesque individuals of cliff rose on an open slope and continues up to West Canyon Pass at 8,137 feet. There we were greeted with a stiff breeze that felt good. From this pass you have one of the most scenic panoramas anywhere in the range, even though a good portion of this area was severely burned in the aforementioned fire.

You can see down the spine of the Stansbury Mountains all the way to Deseret Peak, and when its couloirs east of its 11,031 foot summit are still covered with snow, it is quite beautiful. Box Canyon is in the foreground with  Granite Ridges and Baker Peak rising above it to the south. The scene is one of open mountain slopes with pockets and islands of conifers here and there on the northeast facing slopes of the mountains.

We dropped our packs and had lunch in this place. The rocks here are conglomerate in nature, comprised of different white, pink and orange gravels. These rocks are covered with different lichens of black, light green, orange and yellow. After lunch we sat and watched a couple of hawks riding the breeze high above. It was quiet except for my radio playing Led Zeppelin’s “No Quarter.”

A little blue bird was with us there in the pass and it was a pleasant moment, which I like to reflect on when life gets rough or I’m having a bad day. From that pass there are numerous peaks you can summit. Some of which are West Canyon Peak, Round Canyon Peak and Onaqui Peak.

West Canyon is a great destination for an early season or fall hike. The trail is pretty good and not too difficult so if your kids are tough they can make it. It gets pretty hot in the summertime and there is no water so bring plenty, plus sunscreen and bug repellent, and have a great hike in the Stansbury Range.