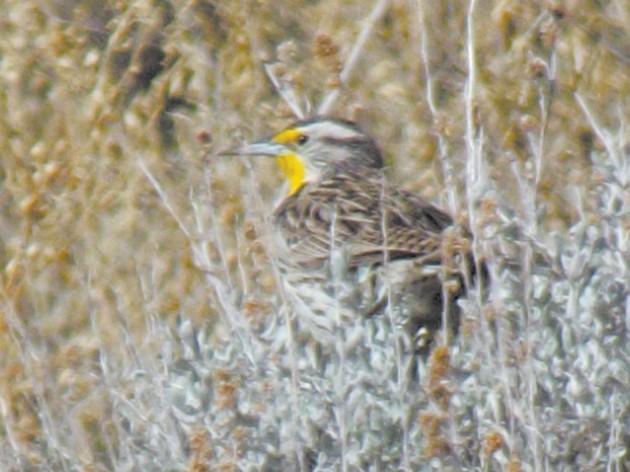 A western meadowlark perches in the Pine Canyon environment.

Popularly known for their flute-like songs sung while in their preferred habitats, the western meadowlark is a very common bird that dwells across approximately two-thirds of the United States. In fact, because Tooele County provides expansive open space, western meadowlarks are found plentiful in and around the areas of Smelter Road, Blue Peak Road, Churchwood Road and also around Settlement Canyon Reservoir.

Having a preference of spacious fields filled with dry grass and sage, western meadowlarks are most likely seen shrilling their songs while perching about field posts, power lines and available trees. Interestingly, males are territorial and one western meadowlark alone will pick his turf that can range from 3 to 17 acres. This habitat domination is known as a breeding territory, where females can mate, build nests, and raise their clutch while males watch over the property for intruding males or predators.

Western meadowlarks build nests for their eggs and offspring. They do not build them in trees, but they place their nests on the ground concealed in vegetation. Unfortunately, a lawnmower becomes a big problem for the western meadowlark for they are sometimes run over without the operator even aware of their presence.

Addie T. Lindsay is 17 years old. She is an accomplished writer and photographer of wildlife creatures, big and small. She can be reached at CritterChatter@Live.com.