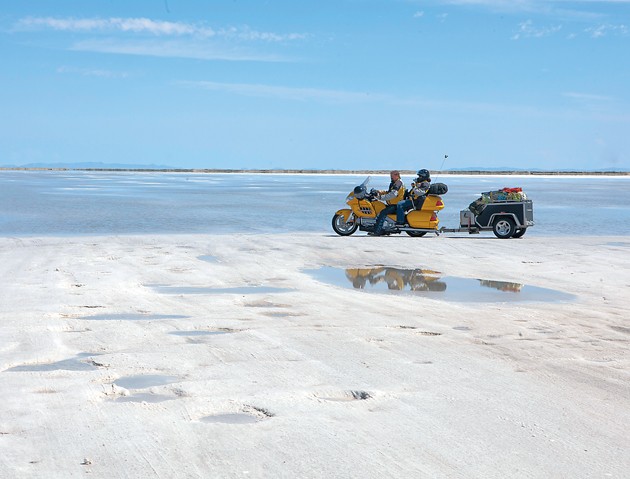 A second racing event on the Bonneville Salt Flats has been canceled because of rain, and Wendover is feeling the pain.

According to the Southern California Timing Association’s website, Speed Week at World Finals has been canceled because the frequent rains in the area have made the normally crisp and dry racing surface too soggy.

“The advanced crew […] reviewed the BSF race courses and determined that they are too wet to have any reasonable expectation of being dry enough to provide a quality race course,” stated a post from Sunday on the organization’s website. “We look forward to being your racing choice next year, but for this year at Bonneville, Mother Nature holds the records.”

The World Finals were scheduled to run from Sept. 27 through Oct. 3. Speed Week, the previous SCTA event on the salt flats, was also canceled in August, again due to heavy rains. One other racing event, organized by the Utah Salt Flats Racing Association, was held earlier this month.

Still, losing two of the biggest events in the area has had a heavy impact on hotels and businesses in Wendover and West Wendover, Nev.

“Economically, it’s terrible,” said Wendover Mayor Mike Crawford. “Speed Week brings probably 500 to 600 cars, and the World Finals is generally 100 cars. But this year, because Speed Week was canceled, they had expanded it and doubled their enrollment to about 200 cars, so it would be a better meet. We kind of figured with the two races and taxes — room tax, sales tax, gas tax — we get about $25,000 in tax revenue alone.”

At Best Western, at least 50 of its 79 rooms had canceled reservations due to Speed Week being called off, said Brenda Miera, a desk clerk, and another desk clerk, Diana Barrera, said Tuesday reservations were being canceled.

“People have been calling and canceling reservations nonstop,” she said. “It’s bad for business.”

At Quality Inn, desk clerk Jaime Trujillo said the hotel had been fully booked for both Speed Week in August and World of Speed this week, but all 100 had been canceled both times.

In West Wendover, too, hotels have noticed the difference. Dora Soto, hotel supervisor for Peppermill Resorts, said the cancellations were starting to trickle in Monday from racers who would no longer need the rooms they had reserved for the event.

“In August, pretty much the whole hotel was booked,” she said. “Not as many were staying this time, so it won’t be as sad as August, because we weren’t sold out.”

Crawford said besides rooms, attendees to the events on the salt flats would have contributed economically on both sides of the state line as they dined out, bought fuel from local gas stations and purchased goods at neighborhood stores.

Those same businesses might also experience a loss of income from buying specialty goods just for the event — Crawford estimates his business, Carquest Auto Parts, will lose about $12,000 from ordering in specialty auto parts for the expected customer base.

“On the plus side, it does recharge our water tables,” he said. “But water doesn’t do you much good if you don’t have anybody to drink it. It hurts.”