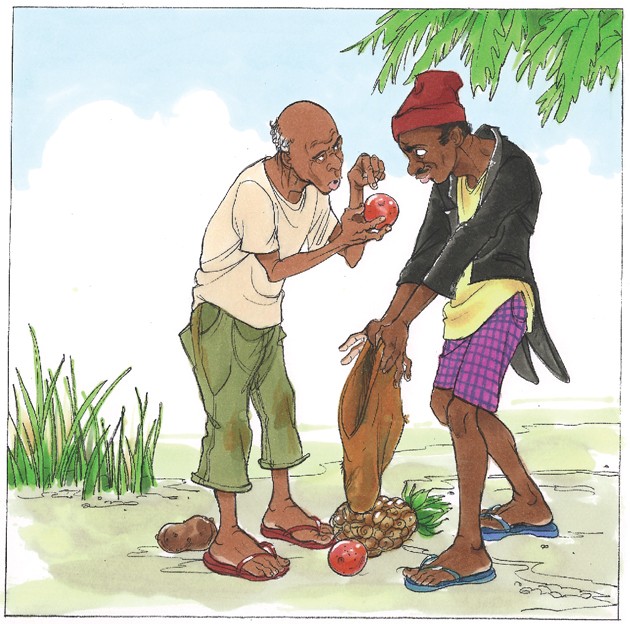 One hot summer day, Uncle Bouki was working hard in his garden. He had been digging and plowing for hours when at long last he decided it was time to quit.

“I’ve spent enough time in the garden,” he said. “It’s time to make a little money for my labor.”

He then packed a big burlap sack with a great many yams and peas, and he set off for the market.

Uncle Bouki forgot to eat before he started walking, and when he was only halfway to the village, his stomach began to growl with hunger.

“My, my, I’ll have to find something to eat very soon,” he said. He walked a little farther, and he came upon a man squatting by the side of the road.

“Hello,” Uncle Bouki called, “how are you?” He was dreaming of tasting some of that crabmeat — and perhaps some onions, too. Maybe, he thought, the old man would share the bowl with him.

But the old man was deaf, so he didn’t hear Uncle Bouki. He was so wrapped up in a haze of happiness as he devoured his food that he didn’t even notice poor Uncle Bouki.

“Please, sir,” Uncle Bouki stepped closer, “could you tell me where I can get some of that fine food you’re feasting upon?”

Again, the old man didn’t answer, and Uncle Bouki’s mouth began to water. “Please,” he begged, “just tell me what you call that fine repast you seem to be enjoying so?”

It just so happened that right at that moment, the old man bit down on a hot pepper, a pepper so hot that he felt as if his tongue had caught fire. He opened his mouth wide and wailed, “Wheeeeeeai!”

He smiled and hurried off to the market, determined to buy himself a big bowl of the stuff — or at least as much as 10 coins would purchase.

When Uncle Bouki reached the market, he hurried to sell his yams and peas. Then he began to walk from stall to stall, searching for this food discovery. At each stall he pulled out his coins and said, “Excuse me, I’d like to buy some Wheeeeeeai.”

Each time the vendor only laughed and said, “You must be mad!”

Everybody laughed at him and whispered behind his back, and that’s how Ti Malice heard the story.

When he learned that Uncle Bouki was searching for a treat called Wheeeeeeai, he had an idea. He hurried home, ahead of Uncle Bouki, and just around the bend from Uncle Bouki’s house, Ti Malice climbed down to the river and cut some cactus leaves and stuffed them into a burlap bag.

By the time Uncle Bouki had turned to walk home, he could think of nothing but finding some of that Wheeeeeeai. His stomach growled, and his mouth watered. His imagination soared. And all the way home he thought about Wheeeeeeai. He dreamed of how good it must taste!

Just before he rounded the last bend in the road, he saw Ti Malice.

“Good day, Uncle Bouki,” Ti Malice said. “And how are you today?”

“I’m fine,” Uncle Bouki said, “except I’m dying to eat a bowl of Wheeeeeeai. Do you know where I could find some, Ti Malice?”

Naturally, Ti Malice said he did. While Uncle Bouki was still walking home from the market, Ti Malice had placed a few oranges atop the cactus leaves in his burlap sack. And on top of these oranges he put a pineapple. And at the very top he placed a big potato.

“I just happen to have some Wheeeeeeai in this bag,” he said. “Here you go.”

Uncle Bouki could not believe his great luck, and without thinking of all the tricks Ti Malice had played on him in the past, he reached into the sack.

He pulled out the potato. “This isn’t Wheeeeeeai,” he complained.

“Reach in again,” Ti Malice said. So Uncle Bouki did.

“I’d never do that,” Ti Malice said, smiling. “Reach in once more. I’m sure you’ll be surprised at what you find!”

So Uncle Bouki reached in one more time, and this time he touched those cactus leaves. The sharp needles pierced his hands, and he jumped into the air and cried, “Wheeeeeeai!”

Ti Malice grinned. “There you go, my friend,” he said. “You’ve found your Wheeeeeeai!”