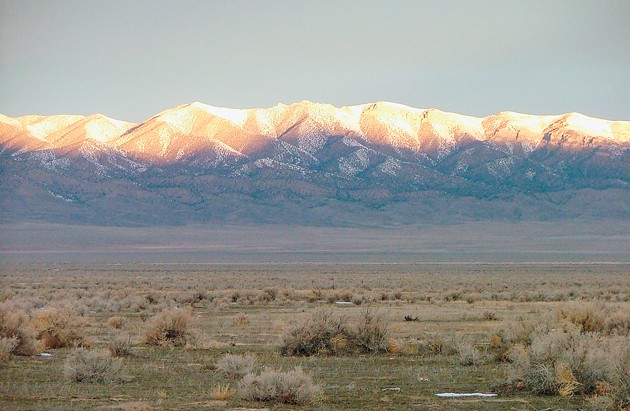 Cedar mountains in Skull Valley as the sun is rising. 7,712 foot Cedar Peak is in the middle.

December 26, 2013
When in Skull Valley, don’t become part of the narrative

“The mind, once expanded to the dimensions of larger ideas, never returns to its original size.”

When I just want to get out of the city and go cruising, I often head west on Interstate 80 to exit 77 at Rowley Junction and head south on state Route 196 into Skull Valley. The deserted highway that heads toward nothing in the wide expanse of the valley is for some reason something that I enjoy.

This open empty land is actually full of interesting little places to check out. Once you start to peel back the onion, you realize that a lot of history happened here that helped shape our nation.

There is also tragedy, failure, sorrow and pain here, as well as memories of hope, joy, and success due to the fruits of hard labor. None of these are something you can see anymore, but the events that cause the echoes of memories to travel endlessly up and down the valley sure enough happened.

Before any of them came through, the Goshute Indians eked out a living in the forlorn sage, sand, and salt desert valley. On occasion a Ute, Paiute or Shoshone raiding party would roam through the valley.

Many thousands of years prior to the Indians we are familiar with today, a great lake named Bonneville covered the valley to a depth of 1,000 feet or more and the scars of its ancient shorelines are visible high on the Stansbury and Cedar Mountains on the eastern and western limits of the valley. Ancient and mysterious peoples, and Ice Age creatures, roamed and lived along its ancient shores and in the Island Mountains.

The name itself when seen on a map is something that would attract my attention. When I travel, things with names like “Skull Valley” jump out at me as something I want to see and determine whether the place lives up to its name. The people who named the valley are long dead and gone and there is controversy as to where the name originated.

One theory states that there was a devastating winter in the 1820s that wiped out all of the bison in the area numbering in the thousands. As a result, there were a lot of bison skulls lying about. Another possible source of the name comes from the practice by early Indians in the area to bury their dead in the springs. Early visitors to the valley found skulls around the springs.

The truth is this valley lives up to its name. Whether it was a band of Indians wiped out by Captain Grant in the breaks of the Cedar Mountains; the Donner-Reed Party piecing together Hastings’ tattered message at Hope Wells; Porter Rockwell administering instant justice; or unsolved murders from the 1800s to present times, this valley is a creepy, yet enchanting place at the same time.

Skull Valley is about 45 miles long from I-80 in the north to the Pony Express Trail to the south. It averages anywhere from 8 to 18 miles wide from east to west. Desert Peak’s 11,031-foot high summit, and the rugged, mysterious, seldom visited west canyons of the Stansbury Range, loom large and form the eastern boundary of the valley. Further south beyond Johnson’s Pass, the lower Onaqui Range hems the valley in and is capped by bald-faced 9,020 foot Stookey Peak.

The Pony Express Trail to the south is where Skull Valley ends and Porter Valley begins. The Cedar Mountains stretch for 38 miles along the Western Side of the valley, and culminate in 7,712 foot Cedar Peak. To the north, the Lakeside Mountains and the Great Salt Lake, comprise the boundary of the valley.

Life in the valley has always been a difficult prospect, as I’m sure the hearty souls who work for Ensign Ranches and the Goshute Indians on the reservation will attest to even today. Sure, they have heat and power now, but the isolation and silence can be deafening—even maddening sometimes and of course there are the infernal distances to reach anywhere. Lack of water and any meaningful vegetation or soil are also pretty depressing.

Magnify these attributes ten-fold in the case of the early explorers and pioneers, and 100-fold for the poor but proud Indians who somehow scraped out an existence in this valley, and you may get some sense of how difficult it must have been. Today, the power goes out for a few hours, or the valley road doesn’t get plowed after a storm in a timely fashion, and it’s an emergency.

In the coming weeks, we will take a look at some of the stories of people who dreamed, worked, lived and sometimes died in Skull Valley. While sometimes somber, this place is also beautiful. In the winter, when fresh snow lies heavy upon the sagebrush and its crystals sparkle through the cloud of your exhaled breath in the winter sun, it can be downright beautiful.

Making tracks pushing fresh powder with every step through this winter wonderland is something everyone should experience at least once. If you go out, don’t forget to look back at Deseret Peak and the giant plume of snow the wind may be blowing off its summit.

It is also an incredible sight to see wild Mustangs of the Cedar Mountain herd roam proud and free across the desert; the solitary pronghorn with his jet black horns; the ghostly coyote looking at you with his creepy yellow eyes; or the seemingly mentally deranged jack rabbit running this way and that in haphazard fashion. If you go out there, you may also see different kinds of birds of prey: hawks, falcons, owls and even golden eagles. You can be assured of at some point seeing the coyote’s creepy pal—the raven. Even when I’m in the most remote, nothing kind of place, it seems there is always a raven around.

There are hundreds of miles of go nowhere dirt roads that are fun to explore in this valley, and some of them lead to interesting and surprising places. If you go to Skull Valley, you need to be prepared so you don’t become part of the narrative. Make sure you have plenty of fuel in your vehicle, a spare tire, and tools to change it. Include plenty of water and food, and a good pair of walking shoes in case you are forced to use them.

You should also do a good map recon of where you are going as well. In this day of Google Earth and good USGS map products, there is no excuse whatsoever to get lost. Next week we will begin the exploration. Until then, Merry Christmas Tooele County.