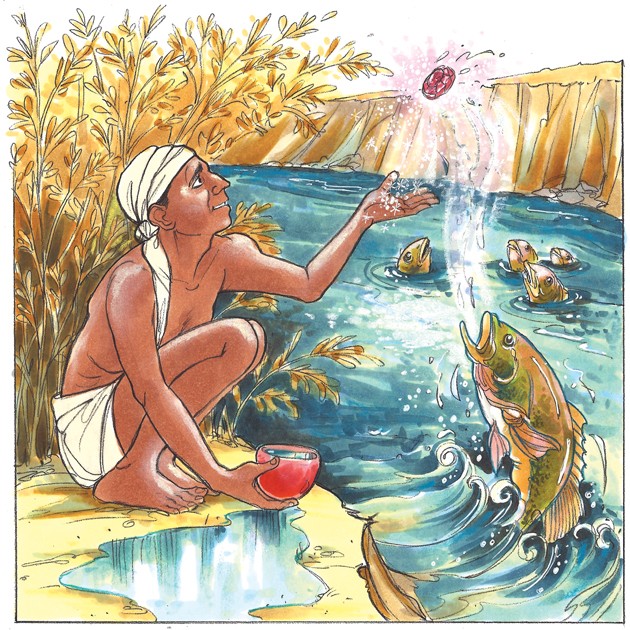 Once upon a time, a poor young man named Hakim had great dreams. He dreamed so vividly his dreams began to seem real. His parents and teachers taught him that he could do whatever he wished. They said he could make his dreams come true if he had the will. “Seek and ye shall find,” his teachers said.

His grandfather taught him that doors open only to those who knock.

One day Hakim decided he would like to marry the caliph’s daughter, and so he traveled from his tiny village all the way to Baghdad. There he knocked upon the door of the palace.

“I’ve come to ask for something of the caliph,” he said.

The servants showed him to the caliph’s adviser, the vizier, who looked the young man up and down. He wore tattered clothes, and his hands were calloused. What, the vizier wondered, could he possibly want of the caliph?

“Sir,” Hakim said, “I am an honest man with a strong will, and I have been guided to come here.”

The vizier was surprised. “Who would guide you to come see the caliph?” he asked.

“My teachers told me that he who seeks shall find, and a door will open to he who knocks. I am knocking upon the caliph’s door because I wish to marry his daughter.”

Naturally, the vizier thought Hakim must be mad. “Come another day,” he said. “The caliph is busy today.”

Hakim thanked the vizier for his time, and the next day, he returned with the same request.

Each day, the vizier explained the caliph was busy with affairs of state and had no time for young men’s fancies, but each day at dawn, Hakim returned and explained his intention. Where there is will, he knew, there was a way.

After several weeks, the vizier grew tired of the daily visits, and so he told the caliph the strange story of the persistent young man. The caliph smiled as he listened to the story — surely there must be some explanation, he thought. He did not wish to punish the young man simply for persevering. And so he agreed to see Hakim.

When Hakim appeared before the caliph, he repeated his request: “I wish to marry your daughter, Sir.”

“You do, do you?” the caliph said, suppressing his laughter. “And what do you offer in return? To marry my daughter, you must be a distinguished young man, or you must undertake a great task. Are you prepared to face great difficulty?”

Now the caliph wanted only to send the young man away, but he decided he must play along. “Many years ago, a valuable garnet was lost from my treasure. Some say it was dropped into the Tigris, and no one has found it. If you can find the lost garnet, you may have my daughter’s hand in marriage.”

Hakim was overjoyed to hear this news and determined to find the lost gem.

And so he set off for the shores of the Tigris River. He brought along a small cup, and every morning he sat at the edge of the river scooping water from the river and tossing it onto the land. He worked for hours — he didn’t mind the weather or the time.

“Where there’s a will, there’s a way,” Hakim said, for he was determined to empty the river and find the red garnet and marry the caliph’s daughter.

The fish in the river watched the young man’s progress, hurrying away from that cup. He never stopped, and after a week, they saw he never would. They began to worry he would empty their home of all its water. And so they called a council.

The king of the fish asked if anyone knew the young man’s purpose.

“He’s searching for the red garnet,” one of the young fish said, for she had listened closely to Hakim.

“And where is it?” asked the king.

“At the bottom of the river — buried beneath the mud,” one of the eldest fish replied.

The king of the fish thought a while and at last he said, “It is my advice that we must take the garnet to this young man, for it is clear he will not give up until he has drained the last drop of water from our home.”

And so, out of fear, the fish dug the garnet from its resting place at the bottom of the river and tossed it onshore.

When Hakim saw it, he quickly picked it up and ran to the palace. And so it was that a poor young man from a tiny village, with will and perseverance, won the hand of the caliph’s daughter.