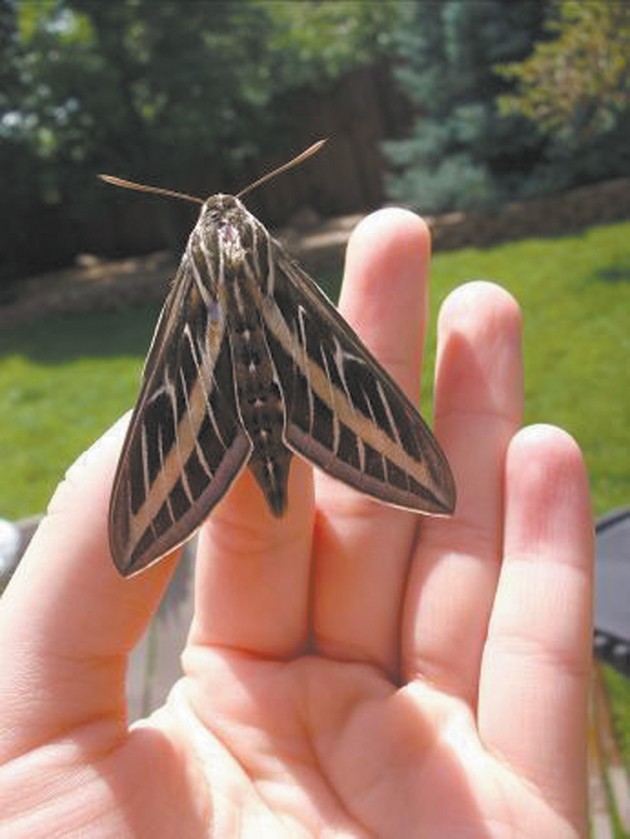 Found in a Tooele county yard, a white-lined sphinx moth rests on Lindsay’s hand as it is photographed. It eventually flew away and was never harmed.

Because of their abilities to fly backwards, sideways, and hover, the white-lined sphinx moth is nicknamed a “hummingbird” moth, not only for its similar capabilities as the birds, but also for its size. These moths can range up to 2 inches in length, with a wingspan that can exceed up to 5 inches.

Somehow managing to exhibit the color combinations of white and brown, the white-lined sphinx moth possesses a strikingly attractive wing-pattern that is shown off on its excessively large wings. However, in order to see their wing markings, they must be resting, not flying. It estimated these moths can beat their wings up to 85 times per second and fly up to the speeds of 10 mph.

White-lined sphinx moths deceive enough from their size and flying patterns, they mimic hummingbirds in the way they eat as well. With a long proboscis intended for reaching flowers, the white-lined sphinx moth maintains its flight while it feeds on nectar. These moths are commonly seen hovering from flower to flower in North American gardens and yards.

White-lined sphinx moths prefer flowers with a tubular shape, and can be seen seeking them day or night. These moths are harmless and cannot inflict bites or stings to humans. However, in Utah, when they are caterpillars, they are a pest by devouring grapes and tomatoes.

Taylor Lindsay, age 17, is a writer and photographer of wildlife creatures big and small. She can be contacted at CritterChatter@live.com.