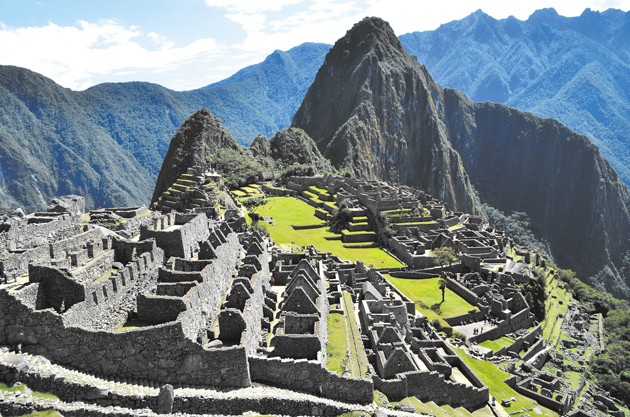 Even with everything the world has to see, like Macchu Picchu, Editor David Bern has found happiness and success in Tooele County. photo Shutterstock

June 20, 2013
Who needs Machu Picchu when you have Jacob City nearby?

Time and life’s tempo have been on my mind a lot the last few days. I usually think about both to a great degree every June. But this year, it has been particularly frequent.

That’s likely because on June 13, last Thursday to be precise, I quietly celebrated a milestone of sorts. On that day 30 years ago, I started my career as a journalist with the Tooele Transcript-Bulletin. With the ink still damp on my freshly minted journalism degree from Utah State University, I rolled into Tooele Valley with a goal: Give a lot, learn a lot, and do good, hard work to one day land a job with National Geographic Magazine.

Because you and I haven’t seen my byline on the pages of that exalted periodical, it can be assumed I failed meeting my goal. But in truth, I never tried. After the premature birth of my second son, and his diagnosis of severe autism, I chose to let the NG dream go that I held since I first learned how to write a comprehensible sentence. Knowing that NG writers and photographers live more on the road than at home—and are single or divorced—I suspected such a lifestyle would detonate my family and me. Somewhere I had heard the aphorism, “Success at the cost of family is failure,” and took it to heart.

Three decades later, I’m still glad I did. And to my delight, that choice has come with an unexpected bonus: I’ve discovered that just about everything I ever wanted to do as a journalist, at least on a local scale but no less important, has been generously provided by the people and place of Tooele County, and Transcript Bulletin Publishing. Who needs Machu Picchu, when you have Jacob City? The Mojave Desert when you have the Bonneville Salt Flats? Chile’s Torres del Paine when you have the Stansbury Mountains?

Plus, over the past 30 years, I have written countless stories on old Olympia typewriters—and on today’s slick laptops and even iPads. I have also taken thousands of photographs using old cameras with Tri-X black and white film—and today’s crazy-fast digital cameras with flashcards that hold thousands of pictures.

Also, along the way, there have been scores of newspapers, magazines and books that have been on my watch, and have been turned and molded in my hands like potter’s clay. In sum, those experiences represent a sizable body of work that make me feel that I’ve gave a lot, learned a lot, and contributed to the progress of Tooele County in some small way.

If I had chased the grand dream, which by the way, I shared with just about every journalism graduate I knew in 1983, I wouldn’t be here to share with you an experience I had only hours into my first day on the job at the Tooele Transcript-Bulletin. After a long winter of deep snow and bitter cold, on Memorial Day Weekend of 1983, the daytime highs suddenly went from the low 40s to the upper 90s. Suspended mountain snow pack began to flow downhill in a wild and dangerous cataclysm of water and debris. Once mild canyon creeks became torrents of mud, rock and trees.

Tooele Valley was flooded by excess mountain snowmelt the likes of which hadn’t been seen before. For a greenhorn journalist fresh out of college, it was the news story opportunity of a lifetime. Instead of starting my career writing about a neighborhood fundraiser, I was covering “The Big Flood” that caused costly damages and interrupted many residents’ lives. And on that first day, with photographer Bruce Dunn making sure I didn’t get lost, or washed away in a ditch, I learned that when it comes to covering the people and landscape of Tooele County, you always have to be ready for the unexpected.

The man had been up all night with volunteers and workers filling sandbags to help protect homes from floodwaters that had hit Erda with unexpected force the day before. Standing with his back turned to me, he was watching a backhoe lower a long piece of shiny, new culvert into a ditch that roiled with water the color of chocolate. The way in which he leaned hard on the handle of his shovel should have warned me that my question had better be a good one, and his patience wasn’t state-of-the-art.

“Excuse me,” I said, walking up to him with eager confidence. “Are you Commissioner Stromberg?”

He turned around and looked at me. I detected a hint of brief judgment in his blue eyes, which, to a point, was understandable. He was in workaday grunge clothes and muddy work boots; I wore pressed pants, a white dress shirt and tie. The contrast was ridiculous. To make things worse, he stood well over six feet tall. And me? On a good day, I barely tick five foot six. He could have easily used my head instead of the shovel to lean on.

He looked down at me. “Yes,” he replied.

“Hi, I’m Dave Bern, a reporter with the Tooele Transcript-Bulletin,” I said reaching out to shake his hand. He slowly took a dirty leather glove off his right hand and firmly clasped mine. He was obviously tired, but his handshake told me he was nobody to mess with.

“So are you the one who prayed for extra snow this winter so we’d have more water for our lawns this summer?” I joked, trying to break the ice. Stromberg didn’t laugh. He didn’t even crack a smile.

I asked him a few questions about what he’d seen the past few days, and how Tooele County was responding to the crisis. With each response, I could tell that his patience was running out. But instead of wisely ending the interview so the man could get back to more important work, I asked him a stupid, rambling question about how much longer he felt the flooding was going to continue, and how it would impact Erda homeowners. I don’t remember exactly what I said, or how I said it. But to this day, I remember every word of his reply.

“How should I know,” he said incredulously. “Do I look like I have a crystal ball or something?”

As you can probably guess, I wasn’t prepared for that one. Nobody in journalism school gave me a tutorial on how to gracefully rebound from a blunt, yet refreshingly honest retort—and get the interview back on point without looking like a total idiot. But evidently there was no permanent damage to my fragile interviewer ego, because I’m still doing it today.

If you knew the late Charles “Chic” Stromberg, who was a Tooele County Commissioner during the 1980s, you could probably hear him say that remark in your mind’s ear. I do, and every time I think of it, I’m still amused. I’m also thankful for the lesson he taught me about interviewing.

Despite that first encounter, Stromberg became a trusted news source and friend. He didn’t have a crystal ball to tell the future, but he did his best to make sure I got my stories fair and right about the county commission. And every time I called for a quote or two, he cheerfully obliged. Like so many other elected officials, and citizens out there who have touched my life, Stromberg “generously provided” to the growth and experience of my journalism career.