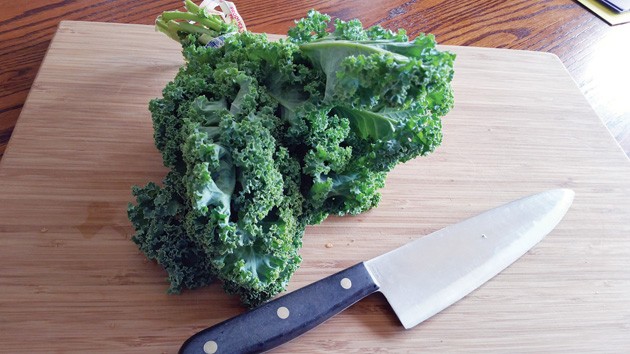 Kale can be purchased at local supermarkets for less than $3.

We hear a lot lately about kale. I personally never ate kale until last summer. My son and his wife had twins (a boy and a girl) and Jay and I took our turn tending them one day a week for several months until they were old enough to go to daycare. It was during one of these summertime lunches that we had some kale salad that my son had prepared. I admit — I was more of a protein/carb eater and veggies, other than salads and canned or frozen varieties, were not much on my culinary radar. But this salad was delicious! He had removed all the stems from the kale and chopped it up very small. Then he massaged olive oil onto all the leaves until they were a rich, dark green, tossed them with fresh squeezed lemon juice and some shredded parmesan cheese and, voilà, a piece of grilled chicken and this salad was an amazing, healthy lunch!

Now kale has been on the plates of Americans for generations — but, for the most part, not as a food meant for consumption. If you are over 40 you may remember the days when your restaurant meal arrived with a pretty green leaf of some kind strategically placed on the plate to enhance the presentation. Those were the days when people sat down in chairs and ate at a table, on a glass plate, with real silverware. Kind of a lost art today — as you don’t normally get any garnishment in your to-go bag from your favorite fast food drive thru. Anyway, much of the time, that old-time garnishment was kale. But all you had to do was taste it once and you never needed to taste it again. It was bitter. I can remember my cousin “double dog” daring me to eat it. Yuck!

So when my son said he had some kale salad for us to eat, you can imagine I was less than enthusiastic. But if there’s one thing I have learned as I’ve grown older, it’s that there are so many new things to learn and experience. That same summer, I got some unfavorable news from a routine blood test and the doctor said it was time to re-think my diet. You guessed it — more low-fat proteins and green veggies and a whole lot less sugar and pretty much all other carbohydrates. Suddenly I was on a frantic quest to see if there was anything that I could now eat that didn’t taste like hay! To my great surprise, there was — and kale is one of my new best friends.

Kale has been touted as the most nutrient-dense food on the planet. That’s a pretty broad statement. It is in the cabbage family (Brassica oleracea) and is related to vegetables like broccoli, cauliflower, collard greens and Brussel sprouts. (If you just got the cringe factor from that list of veggies, let me say that it’s all in the preparation when it comes to veggies. There are many ways to eat a veggie besides boiling it. But that’s another article for another day.) There are many different types of kale with green or purple leaves that are either smooth or curly in shape. The most common type is curly kale that has green curly leaves and a hard, fibrous stem. A single cup of kale contains vitamins A, K, C, B6, manganese, calcium, copper, potassium and magnesium. It also has smaller amounts of thiamine, riboflavin, niacin, iron and phosphorus (sounds a bit like the back of a fertilizer bag!). All that is packed into 33 calories, six grams of carbs (you can subtract the two that come from fiber) and three grams of protein.

Kale also has antioxidants — substances that help to counteract oxidative damage by free radicals in the body. This damage is believed to be among the leading drivers of aging and many diseases, including cancer. It is also high in Vitamin C. A cup of kale contains more Vitamin C than an orange and 4.5 times as much as spinach. And — here’s the kicker for me — eating kale can help lower cholesterol, which may in turn reduce the risk of heart disease. Heart disease runs high in my family’s genetics.

Okay, okay. Enough nutritional facts. If all we need is nutritional knowledge in order to eat right and be healthy, we would not have any obese, unhealthy people around with high blood pressure or heart disease. There are a few “must-haves” for us to change the way we think and act regarding food — is it affordable, can it taste good, is it convenient to buy and is it easy to prepare?

Is it affordable? Yes. There are pre-packaged bags of kale, big enough for several salads, for less than $3 in our local supermarkets. It is not expensive compared to the price of a box of cereal or a frozen, pre-made entrée. And, if you are a gardener, kale is a hearty vegetable that can be easily grown in our valley. Much like spinach, lettuces, arugula and cabbage, it’s an early-season crop that can be sown and grown all summer by re-seeding to keep a continual flow of ready-to-eat leaves. I have a flat of baby kale plants started in my garage under grow lamps as I write this. They will be moved outside into a cold frame in the next few days. Growing your kale costs pennies on the dollar compared to buying it.

Can it taste good? You betcha! I already mentioned the tasty lemon juice/olive oil/parmesan cheese salad but you can add kale to other salads, soups, omelets, turkey burgers and even smoothies. You can bake or dehydrate kale, season it with salt, garlic salt, pepper or whatever your seasoning of choice is, and eat it like potato chips. In the Netherlands, curly kale is mixed with mashed potatoes and bits of fried bacon while in Asian countries it is often combined with beef dishes. The main thing to remember about kale is that you must remove the stems. That is where the bitter taste comes from. Once you do that and chop it up into small pieces, it can be easily added to many dishes to enhance their nutritional value.

Is it convenient to buy? If you are like me, as soon as a recipe calls for something I can’t purchase during my regular grocery shopping, that recipe just became obsolete to me. Kale is very readily available here in Tooele Valley as well as in most grocery stores on the Wasatch Front.

Is it easy to prepare? Well, if you are strictly a microwave cook, you might be in for a little bit of paradigm shift when it comes to prep time. As I have mentioned already, the stems have to be removed so it does take a few minutes to do this and to chop the kale. But the health advantages, to me, far outweigh the extra effort required. And there is nothing like raw food, prepared fresh, to renew your taste buds and eating enjoyment.

So here’s to kale. If you’re not currently a kale eater, I hope you will give it a try. Take it from someone who was NOT much of a veggie eater — there are new culinary horizons to explore. I hope you will venture out into the new frontier of kale and if you do … May the Fork Be With You!