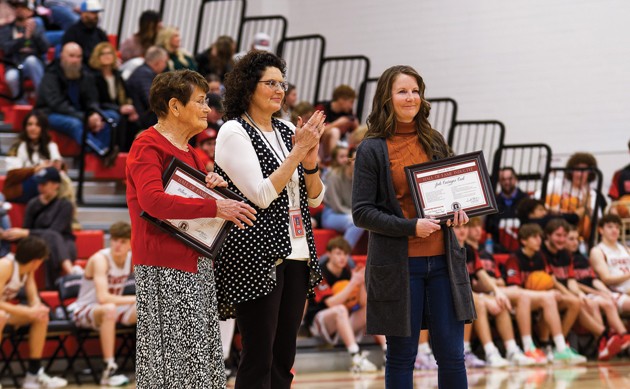 Wilma Crowther served as a guidance counselor at Grantsville High School for most of her career. Her persistent pursuit for educational opportunities for GHS students was pivotal in forming the foundation of academic programs that, decades later, continue to drive students to higher levels of achievement and success.

Jodi Castagno Cook graduated from Grantsville High School in 1994. At GHS she excelled in tennis, volleyball, basketball and softball. She won the 1993 2A state first singles title in tennis, a first doubles region championship in 1992 and a third singles region title in 1991. She also excelled in the classroom and earned Academic All-State honors.

Crowther was selected in the “Tradition” category and Cook in the “Pride” category. Plaques honoring them will hang on the Grantsville High School Wall of Fame.

The “Tradition” category honors a teacher, administrator, or staff member who has made significant contributions to the school or district.

The Wall of Fame was established in 1986, and 47 individuals have earned the honor. Biographies of Wall of Fame inductees are found on the Grantsville High School website.

Wilma Ann Nielson Crowther was born and raised in the small farming community of Romeo, Colorado. She graduated from LaJara, Colorado High School in 1951. Shortly after high school graduation, she married Evan Crowther and settled down to live and work on the farm.

Taking advantage of an opportunity pointed out by a neighbor, Wilma enrolled in her first college course, Music for Elementary Teachers. Within a year, Wilma took advantage of a scholarship opportunity and enrolled full time at Adams State College. She attended year-round, never taking less than 21 credit hours, worked full-time as a secretary for the department head, and cared for her family. This opened up more opportunities for Wilma and her family. She graduated as valedictorian from Adams State College with a Bachelor’s Degree in Business Education and Physical Education in 1959. The following year, she earned her Master’s Degree in Counseling and Psychology. Mrs. Crowther taught business and physical education in Wyoming for two years; Business in Idaho for one year; Physical Education in Salt Lake City for one year; and served as the guidance counselor at Tooele High School for four years before finding an opportunity she loved at Grantsville High School as the guidance counselor. She served the students of Grantsville High School from 1968 until 1997, a total of 29 years.

Mrs. Crowther was the guidance counselor for grades seven through twelfth grades most of her career. She created the course schedule and then, without any use of technology, hand-registered every student’s schedule. She also transcribed every grade on each student’s transcript and made sure they met graduation requirements.

pursuit for educational opportunities for Grantsville High School students was pivotal in forming the foundation of academic programs that, decades later, continue to drive students to higher levels of achievement and success.

Mrs. Crowther has taught BYU Continuing Education courses; Served on the Old Folks’ Sociable committees; and has faithfully served her callings in the Church of Jesus Christ of Latter Day Saints.

Mrs. Crowther worked with hundreds of students to find the next best step in their lives, whether that was continued university education, trade school, or military service. Her focus was to help each student reach their own goals with success. This is a mark of a great educator. A quote illustrates, “Education is for improving the lives of others and for leaving the community and world better than you found it,” which is exactly what Mrs. Wilma Crowther did tirelessly for thirty-seven years and she definitely improved the lives of generations of students and our community of Grantsville is a better place than when she arrived.

As Mrs. Crowther commented, “You can do it, if you have a dream, you can do it.” Mrs. Crowther, you had a dream and you did it. Thank you Mrs. Wilma Crowther and congratulations to you and your family.

Jodi graduated from Grantsville High School in 1994 with academic honors. Jodi was a member of the National Honor Society and the Key Club. While in high school, she played four sports: Tennis, Volleyball, Basketball and Softball. When graduating she received Academic All-State and lettered in all four sports. She was the No. 1 Singles 2A State Champion in 1993; received Region Championships in Third Singles in 1991; and 1st Doubles in 1992, which demonstrates her commitment to be successful.

In 1997, Jodi graduated from Utah Valley State College with an Associate’s Degree in Mathematics; she went on to graduate from Weber State University with an Associate’s Degree in Radiology in 2004, and then completing a B.S. degree in Advanced Radiology in 2006. She has recently been accepted into the Master’s Secondary Education Mathematics program at Western Governors University.

Tennis Coach Don Wayne Nelson commented, “Jodi was a fierce competitor and her practice habits were consistent with her level of play. She was one of the few people who won a State Championship in a #1 singles tennis title at Grantsville High School. Her final match was the toughest of the day. She played a great opponent who gave Jodi a good challenge. Because of her example, during her final’s match, she led the team to a total sweep of the state finals, 5-0. Jodi was a true leader as well as an outstanding player.”

Jodi continues to coach a boys’ fifth grade basketball team here in Grantsville hoping to teach them the skills she learned while playing basketball. She currently works as a paraprofessional at Grantsville Elementary School.

Thanks to Jodi Castagno Cook and her family for being a leader as well as an outstanding player in tennis, volleyball, basketball and softball at Grantsville High School and thanks for Jodi’s leadership in developing young female athletes with confidence and commitment to be the best.