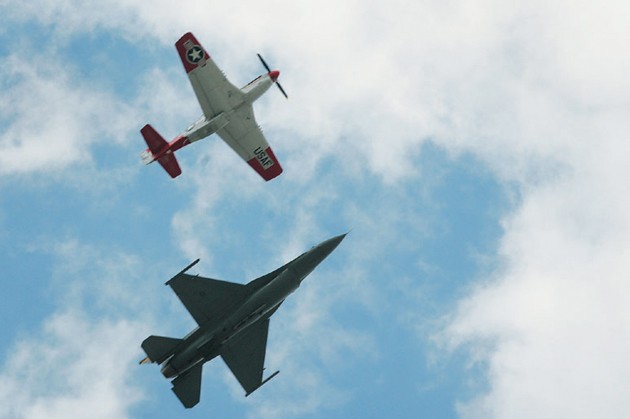 Modern and vintage aircraft will be flying the skies at this weekend’s Wendover Air Show.

September 24, 2009
Wings and Wheels will be in Wendover for Saturday air show

Vintage and modern aircraft will be gracing the skies and the ground at the Historic Wendover Airfield this weekend during the annual Wendover Air Show.

According to Jim Petersen, president of Historic Wendover Airfield, the show on Saturday, dubbed “Wings and Wheels,” will also feature a car show of roughly 100 cars.

“One thing that makes Wendover real unique is the fact that we have aircraft on the base, which really is an original World War II base,” Petersen said.

Petersen said there will be about five aircraft that will be performing aerobatics in the sky, in addition to a number of other aircraft doing flybys and passes.

The Air Force will be bringing a mobile radar station to the show, which people will be able to go through, according to Petersen.

A number of World War II aircraft, including the B-25, and modern aircraft will be available. The large KC-135 tanker will be at the show, and the F-16s from Hill Air Force base will be flying. A British jet called a Vampire will be doing an aerobatic routine, according to Petersen.

Also during the air show, people will be able to go through the officer’s club, which is in the process of being restored, in addition to having the opportunity to see the restoration of a Korean War F-86 Sabre jet.

“They’ll be able to see what we’re doing there and get around the plane,” Petersen said. The funds and proceeds from the air show go to the airfield restoration.

Gates open at 9 a.m. and will close at 5 p.m. Planes will be flying all day, Petersen said, but the aerial demonstrations will start at 1 p.m.

Tickets are $10 for adults, $5 for kids age 9-15, and 8 and under are free. Discount coupons are available at Burger King restaurants.