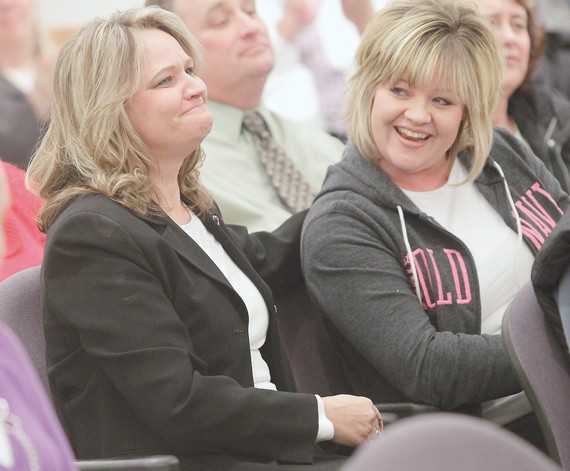 Debbie Winn reacts to being named a new Tooele City Council member at a work meeting Wednesday. Winn will replace Shawn Milne, who was elected to the Tooele County Commission last fall.

Four months after she was fired as executive director of the Tooele County Chamber of Commerce, Debbie Winn has landed a seat on the Tooele City Council.

Winn was chosen over eight other candidates Wednesday evening by a unanimous vote of the four current council members.

“It seems unreal,” Winn said. “I’m honored that these men have the confidence in me and my abilities to do this job. I will live up to their expectations.”

During the council’s work session, nine city residents who had applied to take over former councilman Shawn Milne’s seat were publicly interviewed. Milne, who was elected to the Tooele County Commission last November, resigned from the city council on Monday.

The nine candidates — Winn, Tom Poyner, Melanie Hammer, Shauna Bevan, Daniel Pacheco, Ray Smart, David Swan, Trisha Schelble and Bob Gowans — were questioned by each of the four sitting council members regarding their motivations, what they had contributed to Tooele City in the last two years, if they would plan on running for the seat after the term is up at the end of this year, and what their top priorities were to improve the city.

Each candidate spoke for around five minutes, and in the interest of fairness, all agreed not to enter the room before it was their turn. Once the interviews were concluded, there were two rounds of voting. In the first round, each council member got two votes, while in the second round, each got one vote.

In the first round of voting, Tooele City Council chair Scott Wardle voted for Gowans and Winn; councilman Brad Pratt voted for Hammer and Winn; councilman Dave McCall voted for Hammer and Winn; and councilman Steve Pruden voted for Bevan and Winn. This narrowed the voting in the second round down to the top two candidates: Hammer and Winn. In the second round of voting, all four sitting council members voted for Winn. Although she was appointed and seated Wednesday, she will not be sworn in until the council’s next meeting on Jan. 16. She will remain a city council member until the end of this year, which is the end of Milne’s term, at which time, she has said, she would seek election to the seat for four more years.

Wardle said the council voted for Winn because they felt she was the most ready and experienced out of all of the candidates.

“All of the candidates were qualified, but Debbie is ready to hit the ground running,” he said. “This has been a hard process, but we’re excited to serve with her.”

Winn, who served as the executive director of the Tooele County Chamber of Commerce for seven years before being fired by the chamber’s 15- member executive board in September for undisclosed reasons, said her first step as a city council member is to learn what is expected of her and open the lines of communication with the public.

“I want to talk to the mayor and all the department heads to learn what they need me to know,” she said. “I also want to be accessible to the public. I want them to come to me with concerns, and I want to help them understand how government works and help them to participate.”

Vicki Griffith, broker and owner of Prudential Utah Real Estate and a former member of the chamber’s building committee, said she is upset that Winn was appointed to the seat.

“I think this is going to hurt the city’s relationship with the chamber because there is still an ongoing lawsuit between Debbie and the chamber,” she said. “Debbie’s good at what she does and she’s a good public relations person, but there are some issues that need to be settled. All of the experience she has in Tooele City is because of her [chamber] job. It was her job to go to city council meetings and do community events.”

“We hope to be able to have a good working relationship with her moving forward,” he said.

Wardle said Winn’s firing from the chamber was not a concern for the council.

“That was a personal matter and a personnel matter,” he said. “We didn’t venture into anyone’s employment when looking at the candidates. We have a good relationship with the chamber and we would hope that people would let a personnel matter be just that and move forward. Our intent has always been to find the candidate who is most qualified and prepared to assume service immediately, and Debbie was the most prepared.”