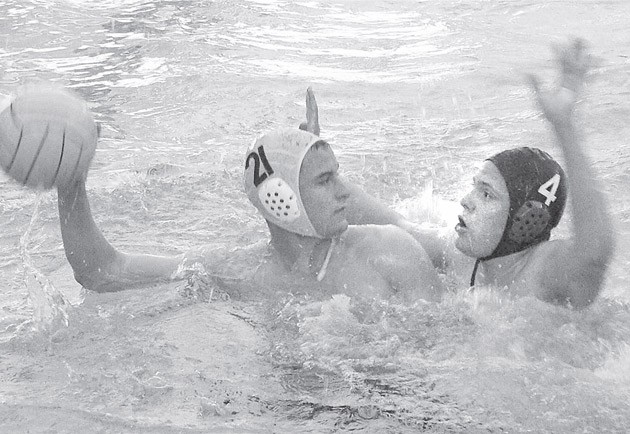 The 14-2 Buffs are back in action Wednesday when they host the Weber Warriors at the Pratt Aquatic Center at 4:15 p.m.

Coach Mike Wells preaches there is no “I” in T-E-A-M, and it showed in the Jordan onslaught. Imlay piled up five assists and goalie Brad Wells found open men five times.

When Coach Wells sent in his reserve crew near the end of the third, Tooele held a comfortable 12-6 lead.

“This was a perfect example of how tough we can be when we play as a team,” Coach Wells said.

“Everybody got into the action.” Coach Wells pointed out that it was the defense of David Nipper, Chase Hochstrasser, Imlay, Cooper, Andrus, and goalie Brad Wells that led to the bulk of Tooele’s scores.

After falling behind by two points early in the second period, the Water Buffs roared back with 11 consecutive goals to cruise to their third win over Bear River.

The dynamic duo of Nobles and Cooper led the scoring barrage, scoring five and four goals respectively in the middle two periods.

However, it was the balanced offensive machine that powered the Buffs over their northern Utah opponents.

Jason Ray popped the back of the net, Hole-D man Nipper contributed with two assists, goalie Wells set up two scores on outlet passes, and Hochstrasser picked up an assist.

Cameron Cooper scored from the hole on an assist from Chris “Toe” Bevan to ice the win.

Tooeles boys water polo team must have spent the night at the Heartbreak Hotel, not the Econo Lodge.

Cedar City edged the Buffs 9-8 in an overtime game that included an ESPN Fantastic Finish, a buzzer beating Hail Mary, and enough drama to make an Indiana Jones flick seem like a yawner.

Think of a 90-foot length-of-the court basketball shot and you get an idea of the chances of scoring in that situation.

It was an unlikely comeback for Tooele who saw its ace scorer ejected and trailed throughout most of the fray.

In the battle of unbeaten tourney teams, Kasey Nobles scored two quick goals early in the first period to give Tooele a 2-1 lead, prompting a Cedar City timeout.

Lucky for the Redman, and unfortunately for Tooele, Nobles was a non-factor after being ejected for objecting to a referee’s whistle.

In water polo, players are ejected if they show any sign of objection to an officials call, either by word or deed. In Nobles case it was simple eye contact, a shrug of the shoulders, and a questioning look that sent him to the showers early.

After Cedar tied the game at 2-2, hole-man Mike Cooper moved Tooele ahead on an assist from Greg Anderson with only 14 seconds left in the first half. Cedar scored five of the first six goals in the second half as the Buffs fell behind 7-4 with fewer than two minutes remaining in the third quarter.

Jason Ray moved the Buffs back into contention in a one man up – similar to hockeys power play – situation.

Trailing 8-7 goalie Wells lobbed the Hail Mary toss 25 yards into the left side of the net stunning Cedar, and sending Tooele into pandemonium, with less than one tick on the game clock.

Cedar scored on a lob in the second overtime. It appeared Tooele pulled off another last second miracle when Cooper fired a bullet past the goalie, however, Tooele was whistled for a ball under violation and the Redmen eeked out the 9-8 victory.

With Kasey out early and Jolley (Jacob Barton) out on a sharp fingernail ruling, we really relied on our younger players, Coach Wells said. T. J. Marshall, Trent Andrus, Mat Snarr, and Chris Bevan all played key roles in our comeback. he added.

Nobles led the Tooele attack early pushing the Buffs to a 3-2 first period lead. Cooper sandwiched two scores between two Barton goals in the third period as the purple caps jumped in front 7-3.

Nobles stole an errant Bears pass and dribbled in for an unassisted goal as the Buffs cruised to their forth win of the tournament.

Tooele posted 14 steals, 4 by Marc Imlay and 2 by David Nipper.

Six Buffs scored as Tooele jumped out early and they padded the lead until the final horn.

Cooper led the scoring with 5 goals followed by Nipper and Nobles with 2 each.

We really moved the ball well against Weber, Coach Wells said of the teams six players who tallied nine assists. The Buffs racked up a dozen steals against Weber.

These games give our younger kids valuable minutes that not only boost their confidence, but strengthens our team, Coach Wells noted.