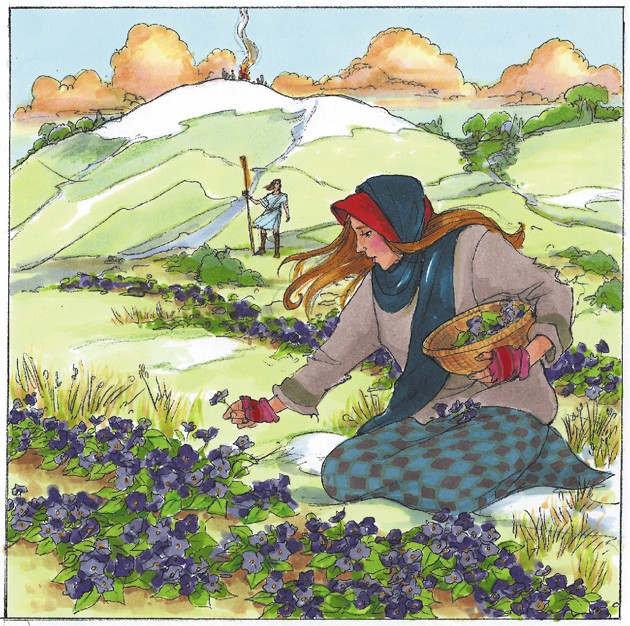 Once upon a time, a woman married a man who had a daughter named Katarina. After they married, the woman gave birth to her own daughter, a girl she named Draga.

A few years later, Katarina’s father died, and the widow began to despise her.

Whenever her stepmother scolded her, Katarina wept. But she cooked and baked and spun and milked the cow and plowed the fields.

Meanwhile, Draga only primped for parties and balls.

Katarina never complained, and as time passed, her half-sister and stepmother grew more cruel and selfish.

One winter day, Draga said to Katarina, “Go pick some violets for me. They must be fresh!”

Katarina looked in wonder at her sister. “But Draga, violets don’t bloom in snow. Let me bring you pine cones.”

Draga scowled and snarled, “Bring me violets or my mother will send you away!”

The widow added, “If you fail to fulfill Draga’s request, you are not welcome here.”

Katarina trudged around in the heavy, deep snow, wondering what to do. Cold, hungry and afraid, she began to pray for death to save her.

They sat silently, looking at the fire. The eldest, with long hair and a mustache as white as snow, sat above the others.

Though she felt shy, Katarina finally approached and whispered, “Excuse me, may I warm myself by your fire? I promise not to be any trouble.”

The old man raised his head. “What do you want?” he asked.

“Yes,” Katarina nodded, but she explained that if she did not bring her half-sister violets, she would no longer have a home.

Clad in white robes, the eldest got off his stone, walked to a younger being dressed in a pale blue cloth and handed him his wand.

“Certainly, Brother January,” March said. He stood and took the wand. As he sat upon the highest stone, he waved the wand. At once, the fire grew higher and hotter. The snow started to melt, while trees and shrubs grew buds. A moment later, the fields all around were blue with violets.

Katarina hurriedly picked the flowers. “Thank you!” she called as she hurried back home.

Draga was amazed at the sight of the violets. “Where did you find them?” she asked.

“At the top of a hill,” Katarina said.

The next morning, Draga demanded strawberries. “They must be sweet. Hurry, Katarina!”

“But strawberries do not grow in winter,” Katarina said.

Draga shook her head. “Get me some, or you will be punished.”

Once again, Katarina plodded through the snow to the top of the hill. When she reached the gathering, she whispered to the 12 months, “Excuse me, this time I need strawberries. If I do not bring them home, I’ll have no home.”

Once again, January rose. He walked to a man sitting opposite him who was dressed in green. “Brother June, take my place,” he said.

So June took his place upon the highest stone and waved his wand over the flames. Soon, the fire grew larger. With that, the snow began melting, and the ground was turning green. Katarina saw star-shaped buds ripening into strawberries beneath blooming bushes.

“Gather them quickly, Katarina,” June said. “They will not last.”

Katarina filled her apron, said her thanks, and raced home.

Smelling the strawberries’ delicious fragrance, Draga asked, “Where did you find these?”

“At the top of the hill,” Katarina said.

Draga and her mother wolfed down the strawberries. When they were done, Draga said, “I’d like some apples now. Run, Katarina! Fetch me apples, or you will die!”

This time Katarina didn’t bother to remind her half-sister that it was winter. She just trekked up the hill.

When she saw the 12 months sitting around the fire, she whispered, “I’m so sorry, but this time I need apples or my half-sister will kill me.”

January stood and handed the wand to one of elders, saying, “September, take my place.”

September moved to the highest stone and waved his wand. The snow vanished, and the trees bloomed with red and golden leaves. Among those leaves, Katarina spied apples.

Katarina shook the tree, and a few apples fell to the ground.

“I think that is enough,” September said.

Katarina wrapped them in her apron, said her thanks and hurried home.

“Where did you find these apples?” Draga asked.

“On the top of the hill,” said Katarina.

“Why did you bring so few? Did you eat some on your way home?”

“No,” said Katarina. “The men guarding the hill told me this was all I could take.”

Draga scowled at Katarina and hissed, “Then I will go get the apples myself!”

She wrapped herself in a thick cloak and began to awkwardly climb the hill. When she reached the top, she ran forward to warm herself by the fire.

“What are you doing here?” January bellowed.

“None of your business!” Draga said, and turning her back on the fire, she walked toward the trees.

Furious at the girl’s rudeness, January waved his wand over his head. The sky turned dark. Thick flakes of snow began to fall, and in their whirlwind, Draga became lost.

Back home, with no sign of Draga, her mother became panicked and climbed the hill. The wind shrieked, drowning out the sound of her voice as she called, “Draga, where are you?”

Katarina prayed for her stepmother and half-sister, hoping they were safe. She continued to wait for them, but they never came home.

Katarina inherited everything. From that day on, she never demanded strawberries or apples or violets in winter, and she cherished each season for its special gifts.