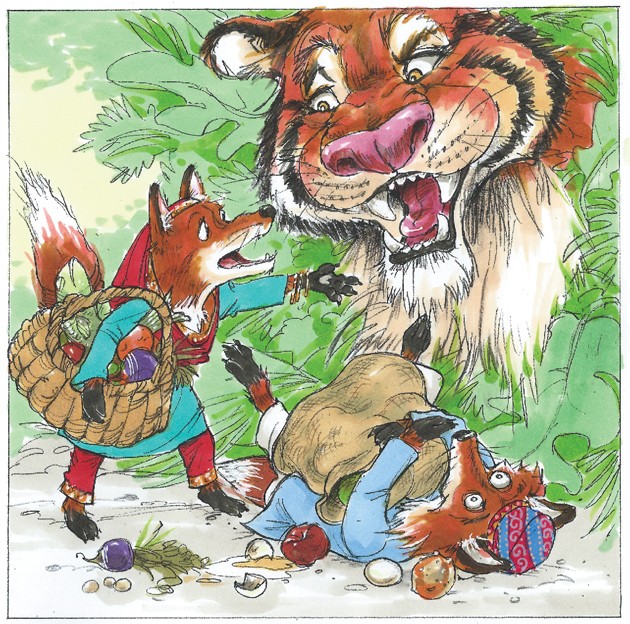 Once upon a time in Pakistan, Mr. and Mrs. Fox lived with their five children in a hole in the ground.

Every evening Mr. and Mrs. Fox crept out of the hole and raced to the bazaar just as it was closing for the day and the vendors were shutting down their stalls. They waited until everyone was gone, and then they crept through the stalls searching for food to bring home to their children.

They often found rice, mangoes, peppers, beans and chickpeas. Sometimes they were lucky and found leftover fish or meat someone had carelessly dropped. When their sacks were full, they hurried home.

Mrs. Fox was a fine scavenger, but Mr. Fox was boastful. As they ran among the barrels and bushes, he would call to his wife, “How much have you got, dear wife?”

“Perhaps enough to fill a tiny vegetable basket,” she would reply, always modest. “And you, dear husband? How much do you have?”

“If I keep hunting, we’ll need to find an ox to carry home my supply!” he called.

Mrs. Fox smiled. She understood her husband liked to brag, and she never complained. So long as they had enough, she was happy.

One evening as they were running home, Mr. Fox was bragging again. “You’re lucky to have me,” he said, just as a tiger stepped out from behind a bush and growled.

“Stop right there!” Mr. Fox cried. But the tiger grinned, and Mr. Fox crumpled to the ground at the first sight of those gleaming, sharp teeth.

He might have been the tiger’s supper if Mrs. Fox hadn’t stepped in front of him and said, “Nice to see you this fine evening, Uncle Tiger. We were hoping to run into someone as wise and clever as you! My husband and I were just having an argument, and we need someone to help us settle the matter.”

The tiger was pleased to hear such kind words. Almost no one ever addressed him as Uncle Tiger or praised his wisdom.

Mr. Fox was amazed at his wife’s calm, but when he heard the tiger’s words, he began to feel a little bit brave.

“My husband and I have decided to part ways,” Mrs. Fox said, “but we have five children at home. We can’t decide how to divide them between us.”

“Right,” Mr. Fox echoed his wife, though he could not imagine where this would lead.

As for the tiger, when he heard about the five children, his mouth watered.

“I think I should have three,” Mrs. Fox continued, “and he should have two. But my husband says the three boys should be his, and I should keep only our two girls. So, Uncle Tiger, which one of us is right?”

Mrs. Fox could see that the tiger was thinking only of how delicious those fox cubs would taste. She watched him licking his lips and understood that her plan was working.

“Well,” said the tiger, “I’ll need to see the cubs in order to make a decision. Why don’t you take me to your home?”

Mr. Fox looked at his wife. He had no idea what to do next.

And with that, she beckoned to her husband to lead the way. So he did, with Mrs. Fox following him and the tiger close behind.

A few minutes later, they reached their home. Mrs. Fox turned to the tiger and said, “You’re far too big to fit inside our hole. We’ll just climb inside and fetch the children. We’ll bring them out here for you to see, so you can make your decision.”

“Good idea,” said the tiger, and once again he licked his lips.

Mr. Fox was still confused. But when his wife told him to go first, he leaped right in, relieved to get away from the tiger.

Mrs. Fox stayed a little while. “I’ll bring them all out together,” she said, “and of course we won’t make you wait too long. I’ll check to see if anyone’s sleeping, though I doubt they are. They’re getting big, and they don’t need to sleep as much as they once did.”

She kept talking: “Thank you, sir, for being so gracious and kind. We’re very grateful. We were hoping to find just the right judge to make this important decision. You are obviously the perfect choice!”

The tiger was so flattered that he practically blushed as Mrs. Fox climbed into the hole. “I’ll wait right here,” he called after her.

Naturally, once Mr. and Mrs. Fox were safely inside the hole with their children, they moved everyone as far away from the opening as possible.

Mrs. Fox whispered the story of their getaway. “Be as quiet as you can,” she said, “and when the tiger knows that he has been tricked, he’ll go away.”

Above the hole, the tiger waited patiently, his mouth watering and his stomach growling with hunger and desire. After a while, the sky grew darker, the stars came out and the moon traveled across the sky. At midnight, the tiger realized he might have been tricked. It seemed that those foxes weren’t going to come out of their hole.

Still, he waited all night long.

As the sun began to rise, the tiger decided he must look elsewhere for food. Disappointed and starving, he went on his way. When at last Mr. and Mrs. Fox knew it was safe, they peered out of their hole.

“We’re safe!” Mr. Fox cried, and from that day on, he always kept an eye out for tigers. He also stopped bragging about himself. Forever after that day, he gave credit to his wife for her fine hunting skills and for her wisdom.

“She’s the finest wife in the world,” he bragged whenever he had the opportunity.

And they lived happily ever after.