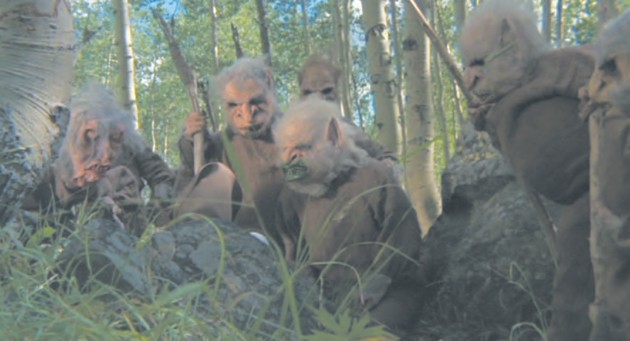 A group of vegetarian goblins lurk in the woods in the 1990 “horror” flick “Troll 2.” Filmed in Heber and Morgan, the film is widely recognized as one of the worst films ever made. image courtesy of Epic Productions

February 16, 2012
Worst film ever made is definitely worth seeing

The common consensus among many film historians is that “Troll 2” is the worst film ever made, so I guess you could say I had very high (low?) expectations going into my first viewing of the 1990 “horror” flick.

Doing some research beforehand, I found that the movie has a zero percent approval rating on RottenTomatoes.com and a 2.3 out of 10 score from users on IMDb.com, easily placing it in the bottom 100 lowest-rated films on the site.

No research, however, could have prepared me for the experience of actually watching “Troll 2.”

Filmed in Utah — Morgan and Heber — by Italian film makers, “Troll 2” tells the tale of a family who goes on vacation to the small, remote town of Nilbog. While there, they engage in a battle for survival as they are attacked by vegetarian goblins (stay with me) who try to force the family members to eat the local food, which contains a gooey green substance that turns people into plants, thus making them edible for the goblins.

One may note that my plot synopsis didn’t contain any mention of trolls. This is no mistake. The film was named “Troll 2” by the film’s distributor, Epic Productions, who sensed the movie would be a flop and attempted to affiliate it with the 1988 horror flick “Troll,” which was a minor hit.

I have heard people talk about train wrecks that are impossible to turn away from. That’s pretty much the experience of watching “Troll 2.” Few films, if any, have ever failed so spectacularly at every aspect of film making — the acting, shot composition, dialogue, editing and continuity. The low-quality of the film reached the realm of the surreal.

Even after more online research, I discovered that the movie was directed by an Italian man named Claudio Fragasso and written by his wife, Rosella Drudi. According to cast members, Fragasso and Drudi knew very little English and the actors were very confused about most scenes in the film.

In 2010, the child star of the film, Michael Stephenson, now an adult, released a documentary about the movie titled “Best Worst Film,” which is equally as fascinating as “Troll 2” itself. Ironically, the documentary holds an approval rating of 94 percent on Rotten Tomatoes.com. It documents the movie’s main actors attending various screenings of the film in Utah, Hollywood and other locations, which are also attended by hundreds of devoted fans of the “horror” flick.

The documentary has the cast on record recalling that they would frequently suggest to the director that they be given the chance to say their lines in regular American English. The director denied those requests, insisting the lines be recited verbatim from the script — with unintentionally hilarious results.

For example, in one scene, a teenage girl played by Holly McFarland — who would later have a prominent role in the LDS film “Singles Ward” — enters a kitchen and asks her mother, “What’s for breakfast?” The mother replies, “Nothing.” The teenage girl protests, saying “What? I’m hungry enough to eat a horse. I’ve been fasting for two days.”

The proper thing to say would have been “I haven’t eaten in two days,” because fasting is a religious practice and doesn’t apply here. But apparently the director insisted.

As  shown in the documentary, most of the cast began to embrace the low-quality of the film when it started to garner a cult following a la “Rocky Horror Picture Show.” Screenings of “Troll 2” are now held several times a year all over the world, including by the Salt Lake Film Society. Actors from the film often attend these screenings still, holding Q&A sessions and performing brief reenactments of some of the more memorable scenes.

Fragasso and Drudi, however, still believe the movie is one of high quality. In “Best Worst Movie,” Fragasso calls the actors “liars” and “dogs” for making negative comments about the film at Q&A sessions. Fragasso was also frustrated when audience members laughed at unintentionally hilarious scenes during a special screening.

“Troll 2” and “Best Worst Movie” are both instantly streamable on Netflix. Although watching “Troll 2” was an immensely enjoyable experience, I am obligated to give it an “F” rating, due to the overall quality of the film. Although an “F” grade typically stands for “fail,” this time the “F” could just as easily stand for “fascinating.”

Inspired by true events, “The Vow” tells the story of Leo (Channing Tatum) and Paige (Rachel McAdams) who play a young married couple living in urban Chicago. Driving home one night after an evening out on the town, the couple stop is rear-ended by a large truck, causing Paige to wake up in the hospital with amnesia. Since she can’t remember their marriage, Leo must make her fall in love with him again — a task that is easier said than done with her meddling parents (Jessica Lange and Sam Neil) and her former fiancé trying to win her back.

Channing Tatum and Rachel McAdams have undeniable chemistry — at least, when they are in love. Unfortunately, most of the film sees the amnesial Paige acting very close-minded about the life she had before the accident — especially the part about her happy marriage to Leo. Her unwillingness to view her husband as her obvious soul mate becomes increasingly frustrating as the film progresses. After all, for many women, if they woke up in the hospital with Channing Tatum telling them that he is their husband, they wouldn’t push the issue.

Leo’s genuine love for Paige is the most touching aspect of the film, and one that will satisfy viewers more than anything else, especially the ending — after all the heartache and pain poor Leo goes through, the resolution seemed almost casual, and “The Vow” ends with muted fulfillment for both Leo and the audience.

A sort of hybrid of “Journey to the Center of the Earth” (2008 version) and “Ice Age 3: Dawn of the Dinosaurs,” this film tells the tale of teen adventurer Sean Anderson (Josh Hutcherson) who partners with his mom’s boyfriend (Dwayne Johnson) to find a secret pacific island, where his grandfather (Michael Caine) is stranded. Upon arrival, they discover the real trouble upon arriving is getting home.

The script is blatantly unrealistic, although it does try to justify pieces of this with small scientific explanations that probably make no actual sense. (I wouldn’t know — science was never my forte.) The dialogue is as cheesy as expected, and the funniest moments can be found in the trailer.

All of those things were expected by most, but in general the film is harmless fun with good visuals and nothing offensive or embarrassingly bad. Younger children should enjoy the 3-D and the anecdotes of comic relief Gabato (Luiz Guzman), the helicopter pilot who flies them to the mysterious island, and Dwayne Johnson, who appears to have no problem being a parody of himself in these action/adventure flicks he does for Disney.

Likewise with his performance, “Journey 2: The Mysterious Island” isn’t half bad if one doesn’t take it too seriously, although no more journeys should be necessary after this one.

Starring Daniel Radcliffe in his first major release since graduating Hogwarts, so to speak, the film joins Arthur Kipps, a nineteenth-century lawyer, as he takes an unenviable assignment to prove he is still valuable to the law firm he works for, traveling alone to a remote coastal town where he must sift through paperwork at the home of a recently-deceased woman. Upon arriving, he finds that the townsfolk —for reasons of their own — want him gone, but he goes about his work in the empty house regardless, discovering quickly that the house is indeed haunted.

Unfortunately, we don’t get to see any acting versatility from Radliffe, as his role doesn’t call for it. Nearly half the movie seemed to consist of Harry — I mean Arthur Kipp — lurking around the house, following strange noises and curious sightings, nearly making audience members cry, “Don’t go in there!”

However, “The Woman in Black” is a decently written and decently acted period piece that should easily satisfy fans of the conventional horror genre. It’s a fair addition to the classic story of the haunted house, never letting itself topple into the realm of the ridiculous like many modern fright flicks. With no big-name stars attached, other than Radcliffe, and a brief but notable performance by recent Oscar-nominee Janet McTeer (Best Supporting Actress for “Albert Nobbs”), this British horror flick is clean, uncomplicated and effective.