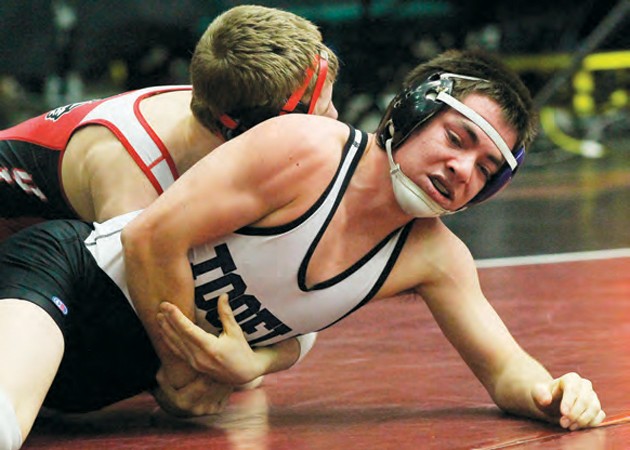 Tooele High School’s Tyson Vigil wrestles a Uintah wrestler at the 3A State Tournament at Utah Valley University Friday. Wrestling will not be part of the 2020 Olympics.

The International Olympic Committee shocked the world last week when it announced that in 2020 wrestling will be removed from the Olympics.

The announcement came the same week of the Utah State 3A Wrestling Tournament in Orem where dozens of high school wrestlers from the area assembled for a chance to achieve dreams of winning championships. With wrestling removed from the Olympics, the state tournament now marks the end of the road.

Jalen Herrera, a Stansbury High School sophomore in the 113-pound weight class, said his dreams of being an Olympian came to an end with the announcement.

Golf was added as an Olympic sport for the 2016 Games, and with wrestling’s removal there can now be other sports considered, including baseball, softball, karate and wakeboarding. Wrestling also goes to this list of “shortlisted sports” that will be considered for inclusion in future Olympics, according to the official website of the Olympics at http://bit.ly/14PIPm5.

The wrestlers at the state tournament all gave similar answers as to their thoughts on the sport’s removal.

Thomas Jensen, a THS senior in the heavyweight division, said he understands that wrestling was removed because of ticket sales and a lack of television audience, but he felt like those things shouldn’t matter when it comes to one of the world’s oldest sports.

“The Olympics were built around wrestling,” Jensen said. “It’s the oldest sport back in ancient Greece. It shouldn’t be taken out.”

Jensen said he knows wrestling has lost some of its popularity. He said people should be willing to give it a chance and not be so quick to judge it.

Nate Moody, an SHS junior in the 113-pound weight class, said he doesn’t know why the Olympics would take wrestling away.

“It’s the only Olympic sport I watch,” Moody said. “A lot of people aren’t happy about it.”

Josh Bishop, a THS junior in the 113-pound weight class said the ticket sales problem shouldn’t matter because the Olympics are not for spectators but for the athletes. “Olympics are about athleticism,” he said, “and that’s what wrestling is all about.”

Following each Olympics, the sports are examined to decide what will remain and what will be added.

According to a press release on the Olympics’ website, “In an effort to ensure the Olympic Games remain relevant to sports fans of all generations, the Olympic Programme Commission systematically reviews every sport following each edition of the Games.”