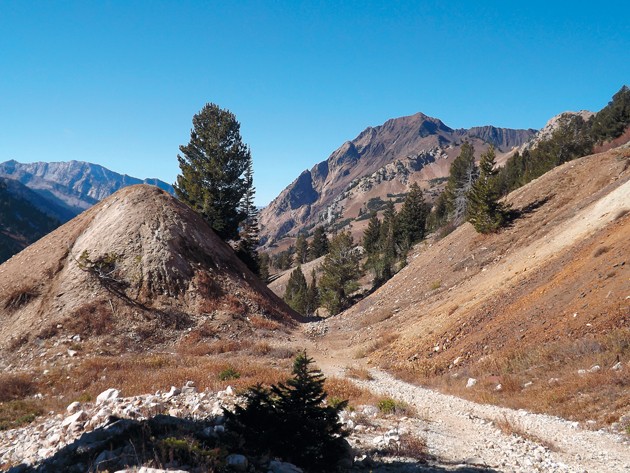 Old mine tailings in Grizzly Gulch are pictured with Mount Superior in the background.

November 5, 2015
You don’t have to be a skier to enjoy the Wasatch Mountains

“No snowflake in an avalanche ever feels responsible.”

Last week, we talked about Alta at the head of Little Cottonwood Canyon in the Wasatch Mountains. Since that time, the area of interest, Grizzly Gulch, has received several inches of snow that often shuts down routes for the winter.

Since recreation continues year-round, snow is not a problem at Grizzly Gulch. Instead of hiking boots and shorts, it’s time to break out snow shoes, skis or snowboards, because this is one of the most beautiful places on earth in winter.

If you don’t respect nature in the high mountains here during winter, you may end up as a sad story in the news. Alta receives more snow each winter than any other area in the state. Its annual average snowfall is over 500 inches, which is more than the Alps, Glacier National Park, the Sierra Nevada Mountains, or Valdez, Alaska receive yearly.

According to the Weather Channel, the only place that beats Alta for snowfall in the U.S. is the Cascade Range in the Pacific Northwest. In fact, the Utah annual snowfall record was set at Alta in the winter of 1982-83. During that season, 846.8 inches of snow were recorded at Alta.

Why so much snow? The Wasatch Range is positioned on the far eastern edge of the Great Basin. The Sierra Nevada Range of California saps Pacific storms of their energy and precipitation as they roll onto the coast. Unobstructed by tall mountains, these storms then cross Nevada and the Great Basin. By the time they slam into the Wasatch Front, they dump deep, powder snow.

Another big contributor is a unique geographic anomaly — the Great Salt Lake. When cold, dry storms pass over the warm waters of the Great Salt Lake, a phenomenon called “lake effect” occurs. Enormous amounts of water vapor are pulled into the storm, which then intensifies.

All of these things together are responsible for the greatest snow on Earth. I have hiked and climbed in mountains all over the United States and several places abroad. The snow in Maine, Washington state or even the Colorado Rockies is just not the same. Trudging through a fresh powdery snowfall on snow shoes, or blasting through a drift on skis, make the conditions at Alta unique.

Due to the towering mountains that form the canyon walls, snow lingers well into summer. Most years, the scene still reminds one of February when it is actually late May. Typically by mid-July, the snow is gone from the town of Alta and is limited to the chutes, gullies and shadowed crags of the highest peaks.

As you hike along the trails of Alta, realize that the high peaks around you simply cannot hold all that snow. Gravity is a law that nature must obey and those piles, drifts and cornices can come crashing violently down at tremendous speeds with incredible force. Avalanches were a constant hazard and reality of life for the early miners who braved the danger of the area in hopes of striking it rich back in the 1870s.

Author Mark Kalitowski wrote an article entitled “Alta’s Avalanche History” that pulled a lot of historical material together from old publications. Period articles from The Salt Lake Tribune describe avalanche horrors that plagued Alta on an annual basis. Stories read like a broken record where entire mine shed, tracks, telegraph poles, mules, wagons — basically anything in the way — are swept off the mountain and washed up against the opposite side of the “U”-shaped canyon like driftwood on a beach.

One article stated the concussion of an Alta avalanche that hit the opposite wall of the canyon was so great it blew doors open and knocked windows out of distant buildings.

Another report stated that a huge blizzard started and the townsfolk hunkered down in their houses. At 10 p.m., a large avalanche carried a section of the town away. At midnight that same night, another let loose down Davenport Gulch in the Grizzly Gulch area and it swept the Grizzly boarding house — a two-story structure — clean away.

The boarding house was occupied by four adults and four children and the snow’s impact ejected the upstairs occupants out the windows — probably saving their lives. The townsfolk assembled and frantically dug several survivors out, but also recovered bodies of those who weren’t so lucky.

Some old west towns like Mercur were plagued by fires. At Alta, it was avalanches. They destroyed the town many times over and these violent, natural bulldozers continue today. If you are going to venture into this area in the winter, it is highly advisable you first take an avalanche safety course, and then carry a locator beacon, avalanche probe and shovel. Avalanche safety courses are available in Salt Lake.

Consult the weather and pay attention to any avalanche warnings and forecasts at the Utah Avalanche Center. Don’t push your luck on this. Several people die every year in the Wasatch because they didn’t respect nature or they were in the wrong place at the wrong time. Both types of occurrences can be avoided if you properly inform yourself and make good decisions.

Dangers aside, Alta is my favorite place in the Wasatch to ski and recreate in the winter. When you couple that resort with Snowbird, located just over the Collins Gulch ridge, you have a vast amount of runs that can be skied, encompassing all kinds of intermediate and technical terrain.

You don’t have to be a skier to enjoy the beauty of these mountains in the winter, though. You can strap on a pair of snow shoes and follow the trails described in last week’s article on Grizzly Gulch.