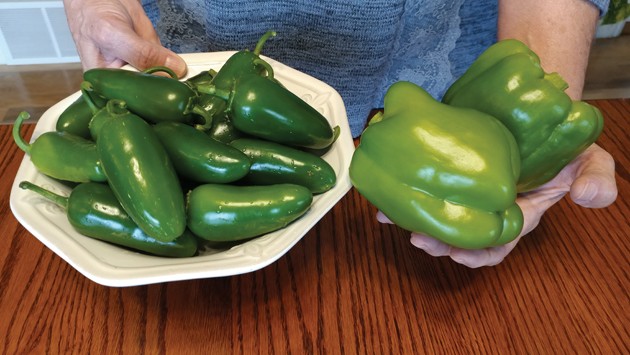 Beautiful peppers can be grown in Tooele Valley. Peppers are heat-loving plants, right along with melons, tomatoes and eggplants. (photo courtesy Jay Cooper)

I don’t remember when my exact initiation to hot peppers was. I vaguely remember it had something to do with an adult convincing me that the jalapeno pepper I was holding was like candy and that I should take a big bite. Fortunately, I was skeptical, but unconvinced. A small bite was enough.

And while I don’t remember details, the memory of that hot pepper stays with me to this day. I like spicy, but I don’t like hot. Call me a wuss. I don’t care. When I eat something, I want to enjoy it, not endure it.

Later on, at a small junior college in southeastern Arizona, I became friends with students from Thailand. They welcomed me into their circle, taught me how to say “I don’t speak Thai” in Thai, schooled me on how to use chopsticks and I enjoyed their cuisine — for the most part.

Let me tell you, Thai food is an adventure. I say that as a compliment. Once I was invited to enjoy a noodle soup that my Thai friends were sitting around a circle eating. I knew something was up by all of their sly smiles and sideways glances. The other dead giveaway that something was amiss, was that they were all sweating profusely on a winter day — wiping their noses and daubing their eyes.

When offered a bowl, I grasped it and took in its scent and started coughing as the aroma of nuclear-strength peppers assaulted my olfactory receptors. I deferred, but I had already provided my friends with a good laugh. My earlier childhood experience came roaring back. Instead, I enjoyed a tamer stir-fry.

The culprits in that dish were small, but very intense peppers. I found out later that that these varieties are on the upper end of the Scoville Scale (more on this later). I surmise to them ingesting that food came with bragging rights. Me, I’m good. If something burns that bad when it’s eaten, it’s got to burn just as bad later on — and yes, that’s what I mean.

If you’ve been to a culinary supplies shop, it’s likely you’ve seen a colorful chart that graphs the heat level of peppers. They look so pretty on the poster, but let’s remember that some of these peppers are what are used to make defensive pepper spray that bring criminals and even bears (I’m not joking) to their knees or at least send them on the run. Yeah, I’m gonna eat them? …  Not.

For gardeners, there are a wide variety of peppers that grow quite well here. There are also ornamental types for containers. I enjoy the look of pepper plants and also eating the peppers, but I only grow varieties that, for me, are edible.

Nowadays I’m pretty successful with peppers, but it hasn’t always been that way. I had some pathetic results over the years until I learned some best practices from fellow gardeners and by attendeding “farm to fork” workshops where small-scale pepper producers shared their expertise.

First off, we have favorable growing conditions in our valley. Dismiss any doubt that beautiful peppers can’t grow here. You can enjoy them on your table, give them away or sell them at the farmer’s market.

Peppers are heat-loving plants, right along with melons, tomatoes, okra and eggplant. They will thrive if you do some simple things besides irrigating and fertilizing them.

The most important fact I learned pretty fast was that peppers are susceptible to sun scorch and cankering. Because of this, they need an abundance of leaves on the plant to cover the fruit. Leaf coverage also affects the health and thickness of the pepper’s walls.

Because of this, small-scale commercial farmers often grow pepper crops under shade cloth. But that’s probably not practical for most of us. I address this issue by planting pepper plants in blocks or at least doubled up in rows that are fairly close to each other.

This keeps the fruit out of the sun, keeps the soil surface a bit cooler and moister and allows peppers to bulk and color up without getting blasted with dry wind. Grouping the plants in blocks fortifies them against wind damage, which is important with the Tooele-area “breezes” we get. Pepper plant branches are brittle and will shear off in higher winds, so neighboring plants work to reduce the impact by spreading it out over several plants.

Currently, my pepper choices are jalapeno and bells. Next year, I plan to add poblano peppers. While I don’t eat jalapenos raw, they make great “poppers” when they are deseeded and roasted stuffed with a cream cheese and bacon mixture. Also, jalapeno flesh on its own is pretty mildly flavored, so it’s a great additive to taco meat and stuffing for zucchini boats. Let’s not forget jalapeno jelly — which can be mild to spicy in heat, depending on whether seeds or webbing are left in, and how much heat is “cut” by adding chopped bell pepper to the mixture.

I give a lot of the jalapenos I grow to a couple of guys that are in a band with me. They eat them like candy. A hot pepper is a hot pepper to me, but they say they can see clearly which jalapenos are going to be hotter.

When the pepper is young, it is less hot. When it begins to mature, it gets a darker, purplish sheen and tastes warmer. Then, it gets small tan “stretch marks” at the peak of heat. Once the pepper starts to become reddish, it loses heat and becomes sweeter. I’ll just have to take their word for it.

What accounts for the “heat” in a pepper? Capsaicin, primarily. It’s one of the capsaicinoids found in chili peppers, and is one of the hottest, even though there are others that round out the category.

Capsaicin has applications beyond culinary uses. It can be found in health supplements, usually in capsule or coated tablet form and ointments that treat sore muscles or stimulate circulation. It’s even used in nasal sprays to help treat congestion. (I can’t imagine doing this).

I have a friend that is allergic to capsaicin, citrus, and many strong spices. He once had a bad cold and a well-intentioned friend gave him some of the pepper-based nasal spray. He used it without realizing what was in it, and let’s just say he reacted adversely — he looked like a cross between a man and puffer fish.

Even so, the habanero is downright wimpy compared to ghost peppers — bhut jolokia — at over 1 million Scovilles. Other names at the top of the spice range are “Dragon’s Breath,” “Viper,” “Scorpion” or “Reaper.” These names make a statement.

When it comes to utility, peppers are more than just flavor. In fact, cancer research has proven that capsaicin is effective in attacking cancer cells. Scientists have found it binds to the cancer cell’s wall. The cell responds by killing itself.

The use of capsaicin to fight cancer sounds promising, and this is only time I think I can empathize with a cancer cell.