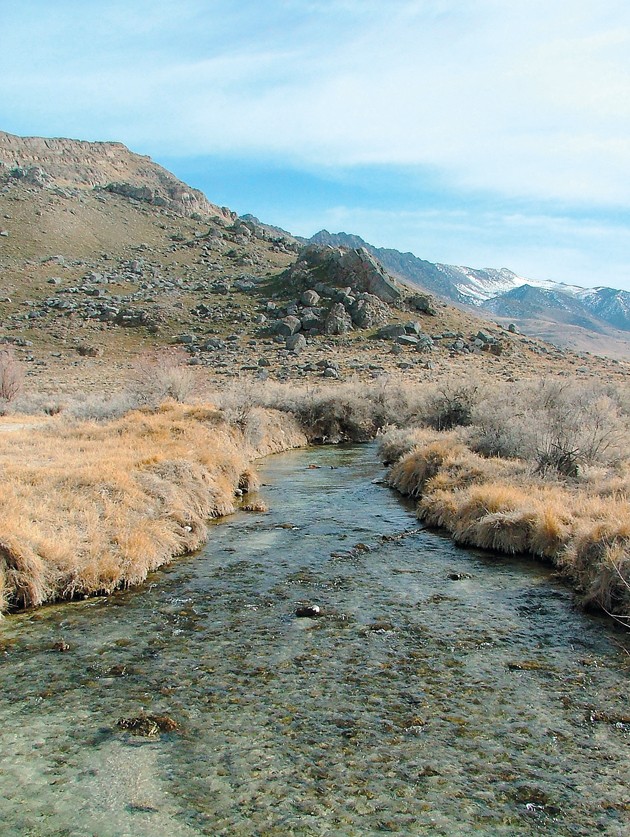 “You cannot step into the same river twice.”

Every visit to the desert is different and there seems to be something special about Skull Valley that makes Heraclitus’ famous quote above especially true.

Back in the 1800s, Skull Valley was known as “Spring Valley.” Captain Howard Stansbury noted it as such during his reconnaissance of the Great Salt Lake and its environs in 1849 due to the numerous springs that issue from the western bench of the Stansbury Range.

Just before you exit off of Interstate 80 at Dugway exit #77, you will notice some large pools on the south side of the road. This is Big Spring. A road has been bladed from state Route 196 over to this spring, which lies at the northern terminus of the Stansbury Mountains. The main spring issues from the bottom of a seven-foot high rock shelf. When I visited this place there was bright green and golden algae in the calcareous rocks where the water was coming out of the base of the rock shelf.

The water must have been a little warm because it was noticeably steaming. There were literally thousands of small fish in the water. I first noticed them when I approached the west side of the main pool. I heard a splash, and then another, then silence, then another splash. I realized the noise was caused by the fish jumping out of the water in the frigid December air. The fish are just slightly larger than sardines. I did see one fatter fish that was at least 10 times larger than the others darting here and there among the rocks. After a while I saw several more of these larger fish, but I’m not sure what kind they were.

There are some interesting rocks jumbled on the slope of the Stansbury Range just across the dirt road from the shelf where the spring issues. These rocks would be interesting to explore and climb on. The Lake Bonneville terrace is prominent on the west face of the Stansbury Range in this area. There is a rail tie OCTA (Oregon & California Trails Association) marker here at Big Springs. Most pioneer journals and those of early explorers make mention of Big Springs, particularly about how the water was salty and inferior to drink.

There is also a Bureau of Land Management information sign here, and if you look south from it, you can see straight down the old Lincoln Highway for miles all the way to Salt Mountain. It is quite the view because the old two track of the old highway is straight as an arrow and bordered on both sides by tall sagebrush, resulting in a narrow corridor of a road.

This road is not visible from the paved state Route 196 (Skull Valley Road), so unless you head towards the mountains and intersect it, you would never know it’s there.

Lone Rock, another pioneer landmark, is visible across the spring about three miles distant out in Skull Valley. When Captain Stansbury passed Lone Rock in 1849 after his harrowing crossing of the Great Salt Lake Desert, he remarked in his journal that he believed a small detachment of soldiers could defend this rock against almost any number of Indians if necessary as it provided a great natural defensive position.

A fast flowing creek connects the main pool of Big Spring to other pools to the north and they all drain through a culvert north under I-80. There are some interesting and abrupt cliffs above the old road where it goes up and over the north tip of the Stansbury Range as well.

Cruising south on Skull Valley Road for several miles from Big Springs, you will come to a sign that announces “Horseshoe Springs” on the right hand side of the road. This is another interesting place that was mentioned in many pioneer journals, and there is another OCTA rail tie marker here.

I often stop at this place for a spell while cruising to and from Dugway Proving Ground.  Something about where the springs are located makes this one of the coldest places in the valley it seems. There is a good parking area here and some BLM signs that talk about early exploration of the area and westward migration of emigrants. There is a foot bridge across a small creek to another BLM sign board and sign-in sheet.

This bridge crosses a swift flowing creek that is about four-feet wide and two-feet deep. Every time I have come to these springs the creek is flowing. There is also a wooden boardwalk about 100 meters long that provides all-weather access along the edge of the north pool.

I have noticed some large fish in these pools on occasion but lately the pools seem to be mostly covered by moss. The springs are situated in a horseshoe shape. In the winter the plants and shrubs around the springs are frosted with snow and ice. On this day there was about three inches of snow in various places around the spring. It was a beautiful clear day, but it was bitter cold.

Horseshoe Springs knoll across Skull Valley Road has some junipers where one could camp. From the top of the knoll you can see the horseshoe shape of the springs that led to their name.

The bold cliffs of Onaqui Peak and the rest of the Stansbury Range rise to the east. Far off across the valley to the southwest, Cedar Peak, the highest point on the Cedar Mountains, is visible with its characteristic limestone cliff band. Looking north from the boardwalk you can see the Lakeside Mountains.

The larger south pool looks to be a bit deeper than the pool by the boardwalk. There are some large fish — either carp or bass — in these springs. There are lots of minnows as well in smaller scattered springs. A good flow of water issues from the springs over some stones and heads off into the alkali sinks of Skull Valley.

There is a foot path along the banks of the pools where the boardwalk ends that provides access to other areas of the springs when it is dry. If it is raining or wet, stay on the boardwalk because the surrounding terrain will be a soupy mess. There is a good possibility that you will see some interesting birds at the springs. On one occasion I saw a large pelican here.

Sadly, green algae chokes these pools and is everywhere in the water. Both of these springs are best visited in the winter as they are absolutely miserable in the summer due to mosquitos.