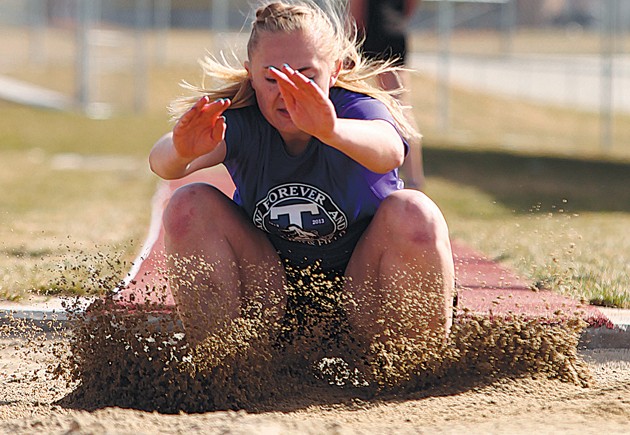 “We’re still young in a lot of events and the future looks promising,” said Tooele coach Al Bottema. “I would say our strength is in the sprints, but that’s the case with most of the teams in our region.”

Some of Tooele’s top track athletes missed out on the Juab Invitational attending other school activities, but the main goals for the Buffaloes are to qualify as many athletes as possible for the state meet, peak about the same time the region championships come around in May and have each individual on the team improve.

“That’s the thing we try to teach the kids regardless of where they are in the rankings. If they improve then they have been successful,” Bottema said. “If you work hard in track it manifests itself with improved performances. If you dog it, that shows too.”

Tooele will be in Heber City this Saturday for the Wasatch Invitational. The Buffaloes host Stansbury and Bear River Wednesday afternoon, and will compete at the Morgan Invitational on Saturday, April 27.

The Stallions will host the qualifying Tooele County Invitational on Wednesday, May 1 with Tooele, Stansbury, Grantsville, Dugway and Wendover competing. The region meet is May 8-9 at Morgan and the state meet May 18-19 at BYU.

At Juab, Chris Bonner finished 18th in the 100 with Thomas Wright seventh and Tayler Boswell 10th in the 400. Wright placed seventh in the 800.

Logan Mott finished 14th in the shot put and 11th in the discus. He tossed the shot 38-feet-3-inches and threw the discus 116-feet-5-inches.

Sean York placed fifth in the javelin with a throw of 148-feet-7-inches.

Junior Melody Callister placed 12th in the 100 with Kenya Russell and Stacey Medley 19th and 20th respectively in the 200 meters. Kiyome Johnson finished 17th in the 400 meters and 16th in the 800 meters. Shawni Williams finished 17th and Mikayla Arnold 18th in the 800.

Eva Olcott and Williams were 15th and 17th respectively in the 1600 meters.